A new field of marketing research that studies consumers’ sensorimotor, cognitive, and effective response to marketing stimuli known as NeuroMarketing. Companies such as Google, CBS, and Frito-Lay amongst others have used neuromarketing research services to measure consumer thoughts on their advertisements or products.

The marketer’s task is to understand what happens in the customer’s consciousness… [and/or unconsciousness] between the arrival of the outside marketing stimuli and the ultimate purchase decision. – Kotler and Keller 2006

Study of the Mind vs. Study of Behaviour

Psychology is the study of the ‘psyche’, in reference to the mind or soul- or at least that was the original intention. Many have attempted to study the self, through introspection, like William James and Freud. One thing remained certain however and that is that the mind was off limits, i.e. it could not be subject to scientific scrutiny. Thus arose in the 20th century, the notion of ‘Behaviourism’-that scientific psychology should be concerned with observable behavior instead of the inner workings of the mind. The founder of ‘Behaviourism’, John Watson asks:

Why don’t we make what we can observe the real field of psychology? Let us limit ourselves to things that can be observed and formulate laws concerning only those things. Now, what can we observe? We can observe behavior – what the organism does or says. And let us point out at once: that saying is doing – or behaving…

Consumer Behavior and the Conscious Mind 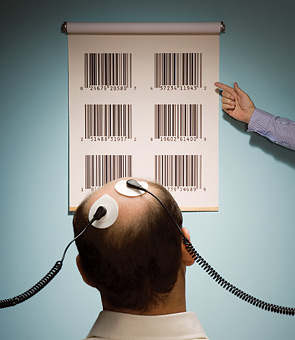 I spy with my little eye, something I would, perhaps like to buy? Consumer behavior is the psychology behind marketing. For years marketers have conducted research to understand what goes on in the consumer’s conscious mind, by observing and decoding behavior. What attracts the consumer? How does he shop and where? And the biggest question of all, WHY? And how can we make him do more of it?!

Methods of research typically engage the consumers in answering questions and providing reasons for their statements. The validity of this type of market research relies heavily on consumer’s self- awareness, honesty, lack of bias and transparency. A respondent might claim to buy product X because of the durability, while the truth is that she buys it, because it gives her a sense of belonging or self-importance. Traditional market research is unable to go past the conscious mind, which according to scientist, influences as little as five percent of our decisions. Everything at a subconscious level which could bias respondent’s answer, such as cultural factors, genetic factors or past circumstances are unaccounted for. That is where traditional market research stops and Neuromarketing begins.

Apparently, Watson was not totally right: saying is not always doing. Though consumers use logic to explain their ‘rational’ choices, oftentimes, they cannot always explain their own behavior. Neuromarketing takes consumer behavior understanding to a whole new level, by elucidating the real motives behind buying. Through brain science tools like fMRIs and EEG technology, neuromarketing studies the regions in the brain stimulated by marketing stimuli. If consumer behavior = psychology+marketing, then neuromarketing= brain science +marketing. This means neuromarketing allows us to delve deep into the subconscious mind of respondents and understand their true behavior and motives.

While much has been said about marketing to the subconscious and subliminal advertising, one particular recent study has really highlighted the significance and potential of neuromarketing. Martin Lindstorm, in partnership with Oxford University, has conducted the largest neuromarketing study worth about $ 7 million over the course of three years, scanning the brains of over 2,000 people. He tells his revealing insights in his book ‘Buyology’.

Below are a few surprising learning’s:

1- Sex does not in fact sell: While consumers’ attention may be captured by the intensity of sexual suggestion, overt sexuality does not enhance brand recall. I.e. Consumers remember the controversy but not the brand.

2- Brands occupy the same place in the brain as religion: This is perhaps because brands use the same techniques as religions to connect with people their daily and enter their personal space. Brand bible anyone?

3-Anti-smoking ads actually cause people to smoke more: It seems that the mere presence of these ads, actually reinforce the idea of smoking. A similar discovery is that adding a salad menu to the Mc Donalds traditional menu made people buy more French fries rather than less, as it made them more appealing.

These findings reveal just how powerful the subconscious mind is, in influencing consumer behavior and purchasing decisions. Moreover, it makes us question some basic ideas which we have been accustomed to believe. Thus, though the field of neuromarketing is still in its infancy and though it may still have its limitations, like the high cost of research and the inability to stimulate a high environment, we are sure to see it gauge the interest of marketers, given the quantum leaps it can offer in consumer understanding.

Yahoo! To Leave Egypt After 3 Years Of Operations And Fire All Employees