Uber’s journey in Egypt hasn’t been an easy one, but it might get a bit more flexible after yesterday’s announcement.

Yesterday afternoon, Finance Minister Mohamed Ma’it announced that representatives of the Egyptian Tax Authority and Uber Egypt have come to a formal agreement to collect Value Added Tax from the ride-hailing company.

The agreement comes at the heels of several weeks where both local Uber drivers and riders had various difficulties and issues with the application. Some news agencies have said that they had sources that “linked [the issues to] data-sharing disputes with Egyptian authorities.”

According to Reuters, “The agreement would also apply to other ride-hailing companies, the head of the Egyptian Tax Authority, Abdel Azeem Hussein, said, although Uber’s main rival Careem said it was already paying value added tax (VAT) in Egypt, where the rate is set at 14 percent.”

Speaking to state news agency, MENA, Hussein stated that “reaching an agreement and determining the tax treatment that will be applied to the company Uber and other companies operating in the same area will enhance confidence and cooperation between the authority and the tax community.”

Although the announcement is new, it seems that the international transportation company has been preparing for the VAT. Last Tuesday, Uber Egypt sent out this email to their riders in anticipation to the added VAT. 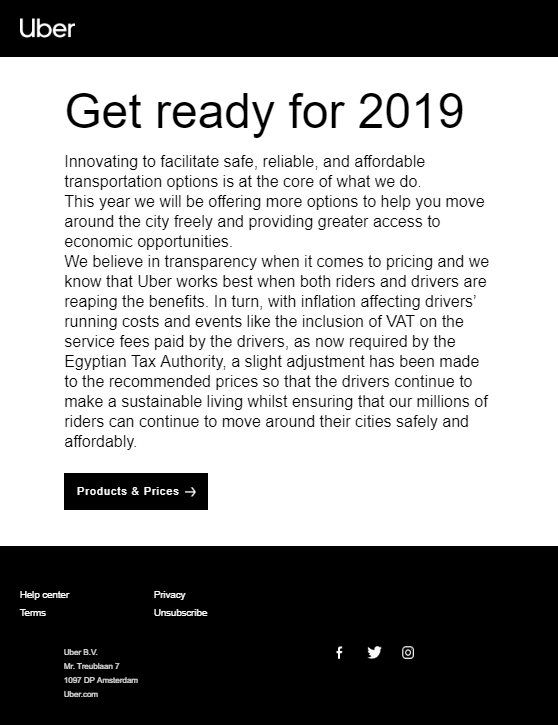 You can find the new prices here.

In an email statement after the email above, Ahmed Khalil, Head of Central Operations for Uber MENA stated “We have been thoroughly assessing driver earnings in light of the upcoming implementation of VAT but also taking into consideration the increasing inflation rate, and the regional standardization of the Uber service fee. Accordingly, the fare prices for trips facilitated through the Uber App were adjusted in an effort to support the stability of drivers’ earnings, while remaining affordable for riders.”

Reuters also noted that “Careem has been paying VAT since March 2018 ‘in accordance with our compliance with Egyptian laws,’ [stated] Hazem Ghorab, Careem Egypt’s head of corporate communications.”

This all comes after last year’s lawsuit against both Uber and Careem, where 42 taxi drivers filed a lawsuit against the companies. Due to the lawsuit, the House of Representatives approved a draft regulating the ride-hailing apps around last May.

Egypt is not the only country that Uber has had difficulty working with. The company has faced and fought several regulatory and legal setbacks from traditional taxi services all around the world. It is currently unwelcome in countries such as Denmark and Hungary.