The UAE has launched a new initiative aims at training a million Arab youth to help the region expand in computer programming, considered the “language of the future”.

Sheikh Mohammed bin Rashid, Vice President and Ruler of Dubai, announced the programme that will open the door to “hundreds of thousands of jobs for Arab youth without leaving their countries”.

A new website, ArabCoders.ae, was developed to support one Million Arabs on their journey to become professional software developers. Master the craft on a FREE online platform with exceptional courses.

The new website will offers online certifications through courses such as website development, mobile interfaces, Android applications and training to become a data analyst. The portal is supported by Udacity, an educational organisation that provides online courses, as well as Middle East recruitment website Bayt.com.

The platform provides a specialized and integrated curriculum in computer science and programming, consisting of three months of training courses in cooperation with the world’s leading educational institutions and international companies.

At the launch, His Highness said, “Coding is the language of the modern era. Our goal is to teach it to one million young Arabs, in order to prepare them now for the requirements needed to excel in the future.” He continued, “Coding will create many job opportunities for young people to compete for remotely; it will pave the way for them to participate in the global economy online, from home.”

“Our project is part of the global initiatives to create hope in the region and making a future for the youth in the area,” Sheikh Mohammed bin Rashid said. “We want to contribute even a fraction of a solution to the problem of unemployment in the Arab world.” 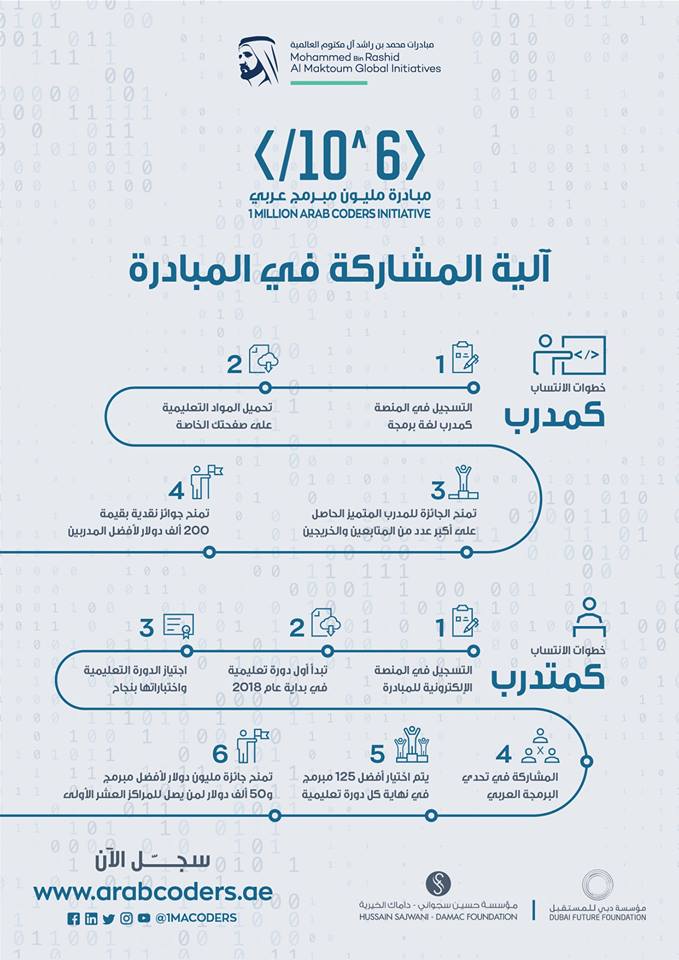 In addition to classes and job postings, 1,000 students will receive scholarships, though the individual amounts have not been disclosed, as well as prizes for students totaling US$1.5 million (Dh5.51m). The top four tutors selected by students will also be incentivised, receiving $200,000 (Dh735,000).

There is a gap in skills and available jobs for youth throughout the Middle East North Africa (Mena) region. The World Economic Forum (WEF) said 65 per cent of people in Mena are under age 25, yet 27 per cent of this age bracket is unemployed.

The One Million Arab Coders initiative

The One Million Arab Coders initiative, managed by the Dubai Future Foundation, aims to empower one million young Arabs in the Middle East by training them, enriching their knowledge, improving their skills, providing them with jobs in the modern tech sector, and increasing their expertise in advanced science.

The initiative will also enable young Arab innovators to play a key role in Smart Government, E-Commerce and IT. The E-Commerce sector has become a global $15 billion industry, while the IT sector has reached $3 billion in the Arab world alone, and is growing at an annual rate of 12%.

This initiative is considered as the first step to mastering coding, which will be crucial to meeting the requirements of the future digital economy.

Protecting brand reputation in the MENA, are you doing it right?