One thing we can’t miss is creative campaigns and adverts; whenever there’s a successful campaign, we’re here to talk about it and give it a round of applause. This time we’re taking our hats off once more for Molto as it released its new campaign and advert.

Without further overdue, let’s find out how Molto is always ahead of the race with its creativity.

The Mysterious Person in The Barber Chair

Molto ran one of the best teaser campaigns that made everyone curious trying to guess who that person is.

On February 7th, the teaser campaign was launched; it started with a simple engaging post that had a man in a barber chair with the new mini magnum in front of him.  The caption of the post had people engaging as it asked them about the mysterious man. Over 800 comments were left on this post.

A couple of days later, another post was on Facebook with the same man but from his back, and again the caption had people leaving 4K comments and over 5.3K likes.

Last Thursday Molto released the new advert and we all finally found out who the mysterious man was.

The legend and icon Mohamed Henedy was the one to promote the new Molto Mini Magnum. The advert brought out the rapping skills of Henedy and the advert went extremely viral.

The new advert and its song are written and directed by the one and only Tameem Youness, who also directed last year’s advert.

Hitting Over Million Views Over the Weekend

The amount of love and attention the advert had received is extremely huge.

After the advert was released, Henedy posted a photo from the advert stating he’s the king of rap, as a promotion to the campaign. We can’t deny that Henedy’s rapping skills were on fire, especially that he rapped a verse extremely fast trying to copy the great rapper Eminem’s style.

The actor even mentioned it on his page asking Guinness Records to give him the fastest rapper title instead of Eminem. We have to say we love Henedy’s sense of humor and how he’s promoting the advert; he’s doing it in a funny and creative way.

The actor didn’t stop there, he actually left a comment on the advert on Molto’s page.

Also, the advert didn’t just reach its target audience, in fact, we have seen many celebrities including the actor Asser Yassin talking about it, sharing it, and mentioning Henedy in their stories

As we all know, a new campaign means a whole different new idea but Molto didn’t exactly follow that rule.

It is a new idea but inspired and based on last year’s one; it’s almost like an updated version. The advert’s jingle is the same as last year’s but with different lyrics and with a little bit of style.

We have to admit that we are very impressed with how the brand came up with something new from something old. This is actually the first time we see a brand does that and still achieve the same success as last year.

Sending Love to The Moderation Team

One of the best things about Molto is its creative content and moderators.

Ever since the advert was released, the moderation team is doing a great job in replying to the customers; they’re using Mohamed Henedy’s memes and comics when they reply, and it’s absolutely hilarious. The brand also came up with a very creative idea to reply to the audience; it is using videos by Henedy that are made specially to reply to people’s comments. 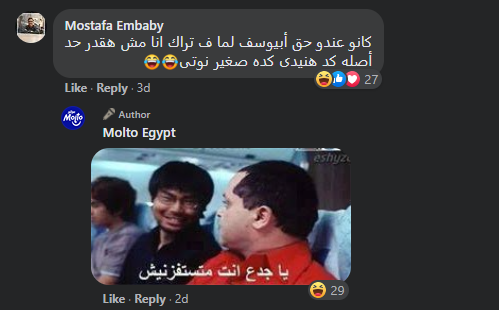 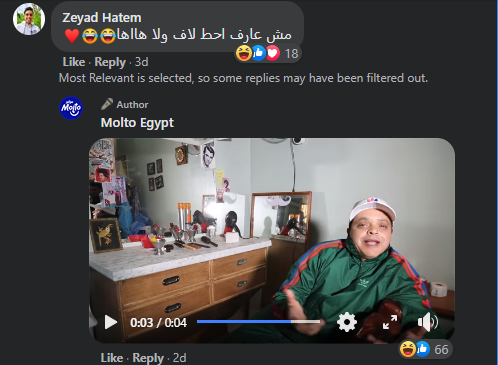 They’re actually creating a bond with the customers because we all use Henedy’s memes in our daily conversation.

So, In the end, we would love to say “Chapeau, Molto”.

Share with us which of the two adverts is your favorite.

"DM for Price": Can It Kill Your Business? Or Can It Make It Flourish?

Amr Diab's 34 Perfume's Advert: Launched To Fly Or To Fail?