Molto strikes again with a new advert! Yesterday Molto released a new advertisement which grabbed everyone’s attention and left us all jamming and probably playing it more than once.

They have been working on a huge campaign to promote their new product Molto Magnum but we didn’t expect the last one to be this good.

Aside from our love to Ahmed Malek, and Maged Al-Kedwany, Ruby is such a huge add and a smart choice to be joining the campaign as literally everyone is in love with her, and she has been gaining more popularity these days.

We have to admit that we are used to this from Molto as they always impress us with their creativity.

Before telling you all about the new advert, let’s remember one of their best commercials that went viral, had everyone talking about it and even some scenes became memes that are being used till this very day.

This Is How It Started

Molto released this funny advert to mark the beginning of their Molto Magnum campaign, which was the first collaboration for Ruby and second for Malek with Molto. But this wasn’t everything they had in my mind; they were planning for something big and we have to say, they didn’t disappoint us.

Knowing How to Tease

On the 13th of Feb, they released a teaser post on their Facebook page saying there is something new coming our way and they dropped a little hint of what they are about to do. 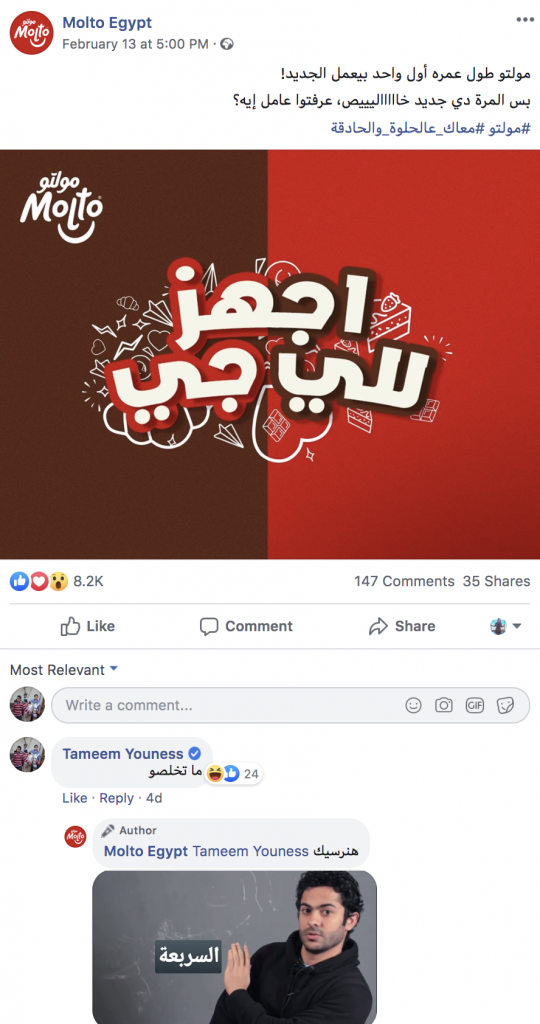 Tameem Youness left a comment telling them to hurry up and they replied with his picture as a meme. Little did we know that Youness had a huge part of the new advert.

Yesterday their new commercial was finally out and we were not disappointed at all, in fact, we think it needed more than just one teasing post, because the surprise was huge.

Molto used the famous trending rap song Bazeet Khalis by Wegz and changed the lyrics to fit the new product and called it Bazzez Khalis. The advert had Maged Al-Kedwany, Ahmed Malek and Ruby rapping and their sense of humor was one of the main factors that made us love the advert so much. Of course it went absolutely viral.

We have to admit, this version is better than the original track.

If you ask, what Tameem Youness had to do with it, then we are going to answer that for you; he is the one to direct this creative piece we enjoyed. The advert was directed in a really good way along with its visuals.

Youness is actually one of the brightest people in the advertising field these days, whether he is directing or coming out of ideas on his own.

We give this advert an A+, it nailed everything all the way from directing to knowing how to reach young audience whether by using famous songs or the right cast. We also give the styling a plus, we loved everything they wore. We are waiting for more from Molto, we know their next campaign will even be more surprising.

Worth mentioning that Edita already got a fresh advertisement section on the corporate website where all brand’s ads are classified.