The startup scene in MENA continues to evolve in break-neck speeds, with startup culture quickly becoming a way of life for most of MENA’s youths. Last year was a great year for young companies and SMEs, with several major acquisitions in between.

Starting the year off with a bang, MENA startup platform and community, MAGNiTT, released an in-depth analysis of startups and venture capital (VC) investment across the Middle East and North Africa through 2019 MENA Venture Investment Report.

According to the report, 2019 was a record year for startups. MAGNiTT used key indicators including number of investments, number of exits, and the total number of investors investing in MENA-based startups to find out the to show the overall growth of the MENA startup scene.

MENA’s Startup Scene Keeps Going Up and Up

Starting the report, Philip Bahoshy, CEO and Founder at MAGNiTT, talks about the MENA scene’s landscape and growth, which is evident throughout the report.

MAGNiTT’s report states that “2019 saw a record 564 startup investments across MENA”. The number of investments in the region went up by 31% compared to 2018, with investments totaling at $704M which is +13%, excluding previous mega-deals in Souq & Careem. 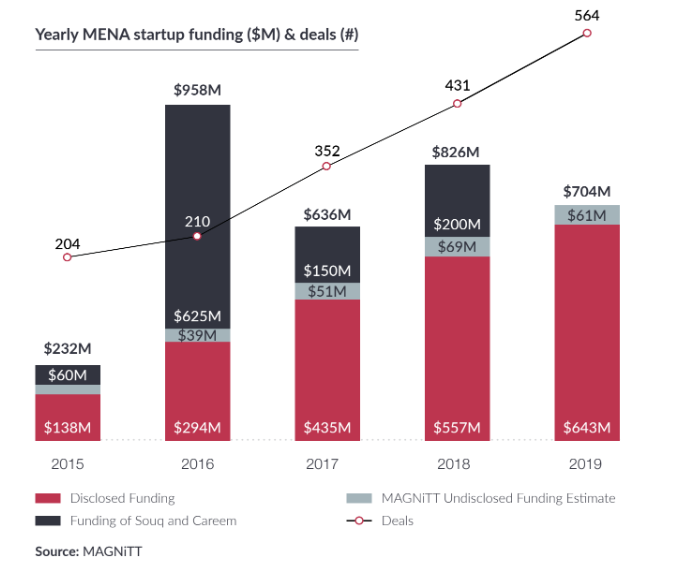 Hasan Haider, Managing Partner MENA of 500 Startups, was quoted in the report saying “Early-stage investments are the bedrock of any startup ecosystem. These investments are the top of the funnel, and cascade down over time into more deals at Series A and B. I believe that this trend will continue – most investments in the MENA region, by necessity, will be at the early stages. However, I expect there to be an increase in later- stage deals as larger and later-stage funds are established in the MENA region”.

Egypt’s growing startup scene saw a steady increase in the number of investments over the last few years. The country was announced as having the most deals in the region, totaling 25% of all deals in 2019.

With continued government support, corporate venture interest, and growing investor appetite for startups, the UAE was the largest recipient of total funding (60%) for last year.

Coming in 3rd in both categories is KSA, which is also the fastest growing ecosystem across MENA.

According to Bahoshy, “we have seen more investment capital in the region than ever before if we strip out previous investments in both Souq and Careem. Both of these have led to an increase year-over-year of 7% in the average ticket size of startups in the region”.

According to the CEO, Uber’s acquisition of Careem as the first unicorn exit in the region also “act[ed] as an inspiration for many founders who look for the light at the end of the tunnel. It also highlights another key characteristic for all founders to take note of: scale is the name of the game”.

During 2019, a record 212 institutions, an increase of 33% compared to 2018, invested in MENA-based startups as investor appetite for MENA tech companies and the startup ecosystem continues to mature.

According to the report, “average ticket size is also up by 7% across all deals in 2019. Moreover, 2019 saw the emergence of non-traditional tech investors such as corporates, PEs, family offices and asset managers, which saw a 39% increase from last year”. 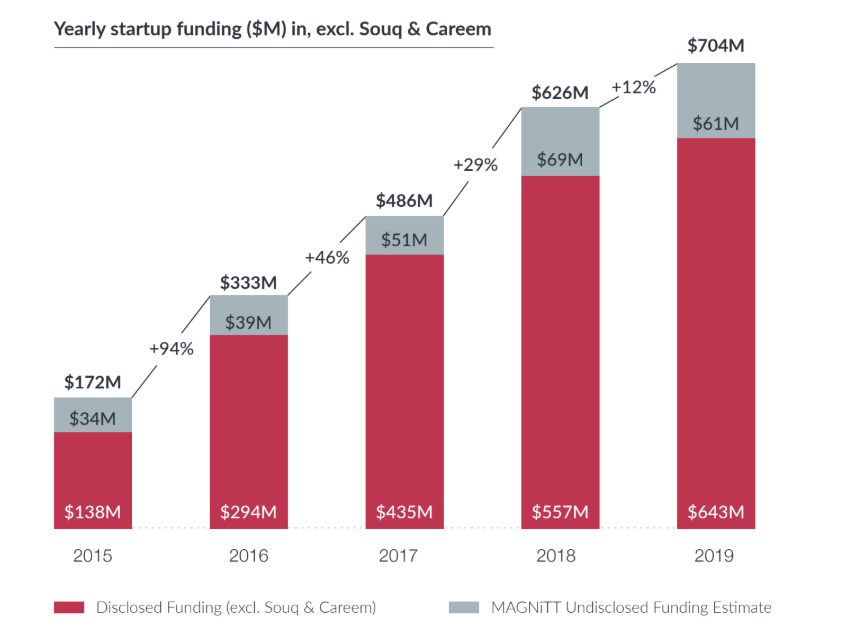 “The MENA region has long had the right ‘metrics’ to be attractive: a large, growing, and youthful population. Moreover, you now also have success stories, such as Careem, and sovereign wealth funds deploying capital. This is great ‘signal’ to US-based investors. The more comfortable they become with their MENA- based counterparts, the more likely they will give the portfolio companies a serious look,” states Christopher Rogers, Partner at Lumia Capital in a quote.

You can find the MAGNiTT infographic summary available online to download in English and Arabic, with a full 100+ page report available for purchase.

How Entrepreneurship Can Shape A Better Future For The…