We just witnessed the first massive outage that happened to Facebook, Whatsapp, and Instagram; the three of the platforms were down globally for 6 hours straight. Technically, during those 6 hours, people felt like they were disconnected from the whole world since Facebook is considered to be one of the main sources that provide information about what is happening currently.

This didn’t just affect the way people communicate with each other on a global scale but also affected brands, companies, and employees whose work depend mainly on social media.

Despite the global outage, some brands and applications turned this outage around for their own benefit and were able to keep the business balanced until everything is back to its normal status.

Egyptian Applications Finding A Way Through The Outage

Every time Facebook goes down for even 5 minutes, people always express their boredom, so can you imagine what 6 hours had done to the users?

So, without those 3 applications, it was definite that people are already having enough, so, some Egyptian brands wanted to keep them company and promote their products at the same time.

Depending on the type of service, each application provides, each one sent out a pop-up message inviting the user to check their offers.

Gourmet:
The famous grocery store sent a pop-up message to its application’s users asking them to use this free time to go grocery shopping without any distractions from the social media platforms.

Contact Cars:
Contact cars is a platform that offers used cars without dealing with brokers and also offers new cars with installments. The platform also used the outage and sent it to its users inviting them to visit the application to check out the cars they want to purchase.

VEZEETA:
Since Vezeeta specializes in the medical field, its pop-up message was different from the other applications. The application urged its users to leave their phones so they can stop looking at their phone’s screen for a while and use their free time to do activities that benefit the body and mind. 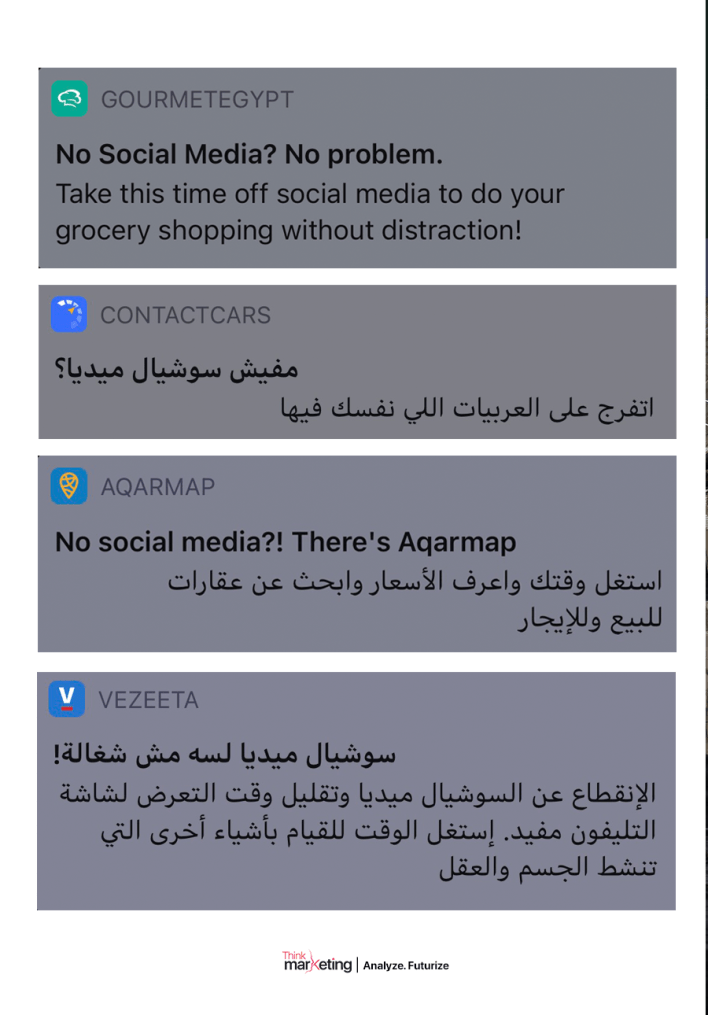 Talabat:
Talabat joined the 6 applications and asked its users to order a meal.

OLX:
OLX had a different message; the application just sent “They all sold you out, but we’re with you”

When this happened, Twitter stepped in and wrote “Hello, literally everyone”. This is the time when Twitter was flooded with memes.

What made this tweet go viral -aside from being written at the right time- is the replies of other platforms on it. McDonald’s replied to Twitter asking what it can get it and Twitter replied with “59.6 million nuggets for my friends”

59.6 million nuggets for my friends

Another reply from Netflix using a scene from its famous series ‘Squid Game’ as a meme to describe the current status of Twitter and its users and Twitter’s reply was even funnier.

Here are some images from the hilarious Twitter thread.

Do you think that this is the smartest move that Twitter has ever made? wait until you see the next tweet by the CEO official account!

As an unverified screenshot suggesting that the facebook.com domain name is available for sale circulated, Twitter CEO Jack Dorsey tweeted, “how much?”

Right after the 3 applications were back, Zuckerberg and the official page of Facebook wrote an apology.

The official page of Facebook had given an apology to all the big and small businesses, groups, and content creators for the outage and that they all have been working hard to restore access and that the applications and services are back online again and Zuckerberg almost gave the same apology.

It’s worth mentioning that it was stated that Zuckerberg had lost around 7 billion dollars due to the outage.

Can This Affect The Future Plans Of Companies?

This outage had a negative on many businesses, which makes us think if companies will start creating backup plans for similar situations.

In fact, this can drive others to create similar applications for businesses to keep them secured and companies can start now relying on other platforms just in case Facebook or any other platform goes down again.

If these applications used this free time, what did you do?

Palma's Period Kit Advert: Breaks The Taboo But Is It Serving The Product?

Birell's New Campaign: How The Different Approach Was Admired By Everyone