With Facebook crossing the 1 billion user-line fresh in our minds, we decided to release the statistics that indicate which countries have the most active Facebook Pages.

he idea that people get addicted to Facebook doesn’t seem that strange. I mean you’ve got to wonder about those people who comment on your status the second you post it. But what about countries? Can an entire geographical entity be addicted to a social network?

Maybe not literally, but you can certainly get an idea of which countries populations are spending the most time on Facebook. Whether that time counts as unhealthy or not isn’t for us to say. According to social analytics service Social Bakers, the country currently at the top of the list is Brazil. Straight off the bat, that shows how little the size of a country’s Facebook population has to do with how active it is on the social network.

According to Social Bakers: “although the United States is the most populous Facebook country with the greatest number of registered Facebook Pages, higher activity on those Pages can be found in other countries”.

The service says that Pages in Brazil publish the most number of posts out of all Facebook countries. More than 800 Pages that we monitored kept their Facebook walls busy with almost 86 000 posts per month. On average, this means 103 posts per Page, which is the fifth highest after Italy, Colombia, Russia and Egypt.

Given that Brazil is the world’s second-most populous Facebook country, and is becoming something of an internet advertising powerhouse, it should hardly be surprising that it tops this list.

Pages in Egypt meanwhile publish 380 posts on average per Page per month. The country does however have almost six times fewer Pages registered than in Brazil and almost eight times less than in the United States.

Social Bakers also says that Turkey is doing really well in terms of posting activity. “Turkey is the seventh biggest country on Facebook and its users seem to appreciate their local businesses social endeavors,” it says. With 758 Facebook Pages, Turkey has the highest Page-to-user ratio out of all Facebook countries.

Russia meanwhile shows the second biggest per capita posting activity on Facebook. “With Russia being one of the few countries where Facebook isn’t a major player in social media, the Page posting frequency implies great potential for further Facebook growth,” says Social Bakers. 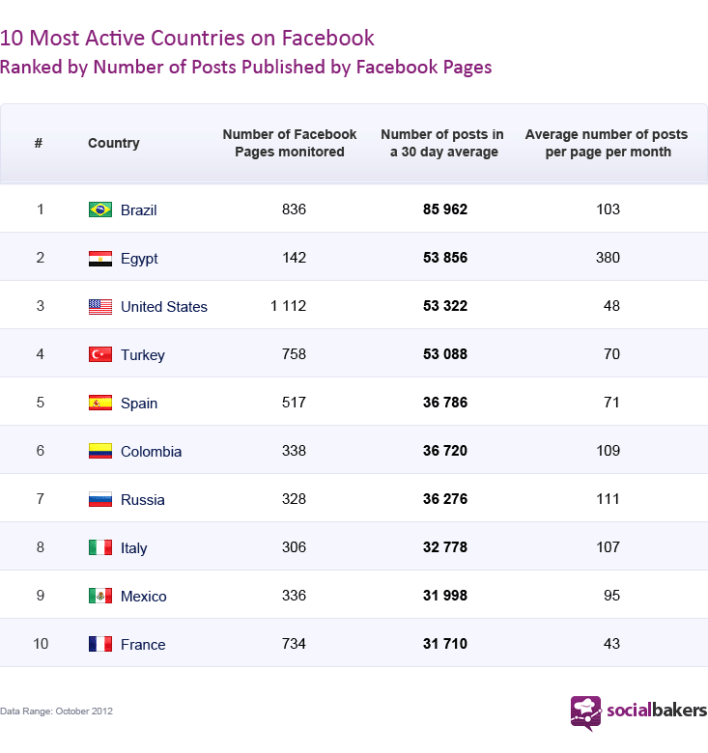