Egypt is back. That’s the message from the Egyptian Tourism Authority (ETA) as the country launches its first global marketing campaign in more than four years.  With the strapline “This is Egypt”, the campaign is backed by an ambition to increase tourist numbers by 100 percent to 20 million visitors and tourism value by 250 percent to $26 billion by 2020.

In a departure from traditional destination marketing, the ETA’s “This is Egypt” will draw on the support of ordinary Egyptians to help drive its success through a digital-first, peer-to-peer advocacy campaign.  With the launch of #thisisegypt, ordinary Egyptians and those who are passionate about the country are able to showcase to the world their personal experiences and to celebrate what they value most about the country on social media platforms.  International celebrities including Morgan Freeman have already supported the campaign.

“Egypt has transformed as a nation in the past four years, and unfortunately the world doesn’t always see our country the same way we do and we need to close that perception gap,” said Egypt’s Minister for Tourism, Hisham Zaazou. “There is so much the world has yet to discover about our country. With ‘This is Egypt’, we will be working with citizens motivated by pride and patriotism, as well as with SMEs who offer unique experiences, social media influencers, and those who can create interesting and compelling content that will show their local perspective. We want to highlight the authentic local experiences that can be had in Egypt’s diverse tourism offering. We are going to be showing travelers there is more to Egypt than sun, sand and sea.”

Campaign branding debuts this week on London buses, taxis and outdoor spots across the capital.  Above the line activity will build on the “This is Egypt” platform in order to showcase a portfolio of destination brands, including the Nile Valley, Red Sea Riviera and White Med regions.  In addition, destination brands have been developed for key cities including Cairo and Alexandria to encourage more city breaks or extended stays as launch pads for exploring the Nile Valley and White Med regions. 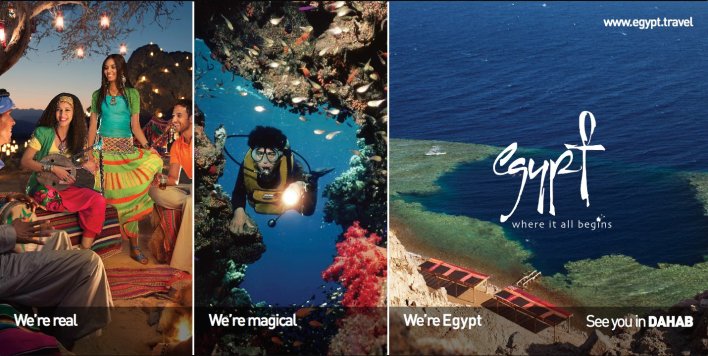 While Egypt’s tourist numbers dropped following the revolution of January 2011, stability has returned to the country under President Abdel Fatah Al Sisi.  Total numbers of visitors increased 400,000 from 2013 to 2014, and value increased by $1.6bn.  Figures from January to September 2015 show British tourist arrivals up 8.1 percent and an increase of 10.5 percent on British tourist nights in comparison to the same period last year.

“Tourism is vital to the Egyptian economy and it is important that we invest in our brand, we need travelers, but also governments and industry to be seeing us differently. Other destinations have been front of mind for tourists, and we need to get back on the consideration list. This campaign is just one part of our investment strategy that includes transport, hospitality and infrastructure. With the support of the Egyptian people and our friends around the world, I look forward to telling a new story about Egypt,” said Minister Zaazou.

The campaign will immediately target volume and value generators including Egypt’s European and Arab neighbours, with an increasing focus on new growth markets and long-haul visitors in the second and third years of the campaign. Year two and three will see the launch of new activities focused on high-value products and services including spa & wellness, MICE travel and eco-tourism.

The campaign is led by WPP’s Team Egypt, which includes JWT as lead creative agency, Hill+Knowlton and Mindshare.

#SummerInSyria Campaign Did Not Go According To Plan!