Netflix is currently facing a huge backlash from people all over the world due to the release of the French film ‘Mignonnes’ aka ‘Cuties’. In a world where we currently fighting against sexual harassment and child abuse, Netflix has made its biggest mistake.

Even though ‘Cuties’ has won the Sundance award, many people have accused Netflix of promoting pedophilia and sexualizing children through this movie.

Since then the famous platform has been under attack and its shares’ numbers have fallen massively.

How The Story Began

Netflix went under attack when it first released an inappropriate poster for the movie that sexualized young girls. This artwork made people create online petitions to stop Netflix from airing the movie.

Due to the attack, the platform apologized and changed the poster.

We're deeply sorry for the inappropriate artwork that we used for Mignonnes/Cuties. It was not OK, nor was it representative of this French film which won an award at Sundance. We’ve now updated the pictures and description.

The movie ‘Cuties’ was released on Netflix on the 9th of September, the following day, which marks the 10th of September, everyone turned against Netflix and threw major and dangerous accusations against it that included sexualizing underage girls and encouraging pedophilia.

Ever since the release of the movie, a hashtag of #CancelNetflix was sparked. One day later from the movie release, over 200,000 tweets were tweeted, which included the hashtag #CancelNetflix making it the number one trending topic on twitter in the US trends section.

I’ve never been as disgusted and enraged about a movie as I have about I can’t watch it @netflix you have to delete this movie right now!!#Netflex #ضد_البيدوفيليا #CancelNetflx #البيدوفيليا_جريمة_ومرض pic.twitter.com/8GUTS7DJ5G

The hashtag is not only used on twitter but also on Facebook since everyone is encouraging people to cancel their Netflix subscription. Many Netflix Facebook groups are furious with the entertainment platform and using the same hashtag.

People are going beyond just a hashtag, they went to Change.org and created a petition calling users to cancel their subscriptions and it gained more than 600,000 signature.

Also, the movie’s trailer on Youtube has 1.8 million dislikes!

What Does Netflix’s Future Hold?

It has been 5 days since people attacked Netflix and canceled their subscriptions, over these five days, the entertaining platform has lost 9.5% from its shares. The number is expected to increase if the campaigns will still run against Netflix. 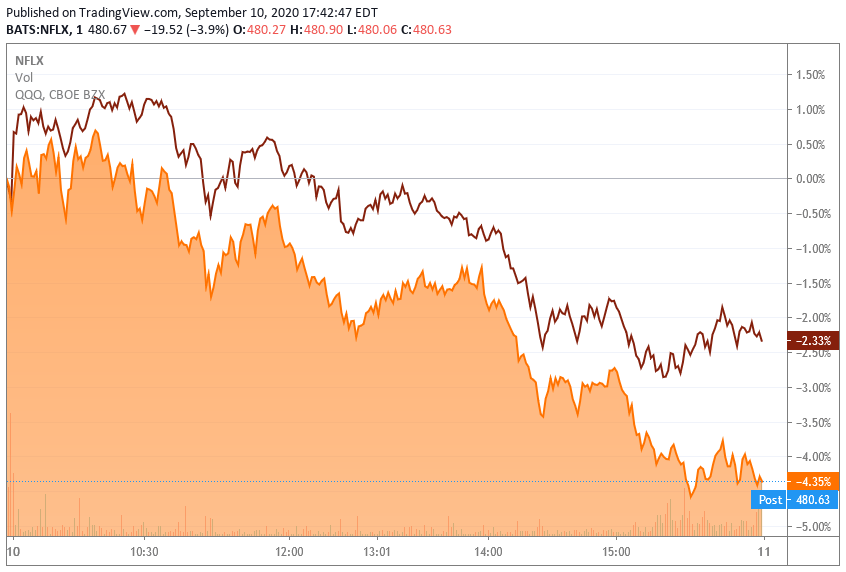 Also, Netflix is not the only entertaining platform that exists; in fact, there are many other platforms that include movies and series that are not on Netflix.

People still have Hulu, HBO Max, Amazon Prime Videos, and many more. Some of these platforms even have their own produced shows; for example, HBO is the one behind ‘F.R.I.E.N.D.S’ reunion, and Hulu is the one behind the famous series ‘Ramy’, which won a Golden Globe for Best Actor.

Also, here in the Middle East, we have Shahid.net and Watch it.

So, in the upcoming next days, we might witness w huge increase of subscriptions to these platforms as people might replace Netflix.

This Time Netflix Is Not Apologizing

Usually, when any famous entertaining network or brand is being attacked, they apologize to its audience to avoid any major loss, but this is not what Netflix did.

In fact, Netflix defended the French movie stating that it is “social commentary against the sexualization of young children,” and “a powerful story about the pressure young girls face on social media and from society more generally growing up, and we’d encourage anyone who cares about these important issues to watch the movie.”

Although there are some people and critics who find nothing wrong with the movie, we’re still not sure if Netflix made the right decision with this statement, or it was better not to comment since this might backfire even more aggressively than before!

Not The First Time for Netflix to Be Attacked

In the Middle East, Netflix is always being attacked for promoting homosexuality, and in the last couple of months, people in the Middle East and around the world also attacked it for streaming the Polish movie ‘365 Days” and people claimed it promotes sexual violence against women.

So, it is obvious that lately, Netflix has been making wrong choices although none of these attacks were as massive as the ones against ‘Cuties’.

So, we wonder if things will remain the same for Netflix as a successful entertaining network or things will change and the platform will slowly fade away; unless it removes the movie.

How to be an even better mentor in 8 steps

How to Stop Your Co-workers from Taking Advantage of You