The Gouna Film Festival may only be in its second run but it’s become one of the biggest events of the year. The festival is all everyone can talk about, from the glammed up celebs to the branded experiences. But it is the latter that we are most interested in, especially brands that have kicked it up a notch with their activations.

Branded activations are a great way to introduce or remind consumers of your product/service. Unfortunately, many brands have become stuck with the classic formulas of simple booths and “throwaway” giveaways.

During ‪‎El Gouna Film Festival 2018, many brands have been doing some great work in producing some fun activities for both consumers and celebrities alike. Some of the most interactive are bringing consumers to the red carpet and closer to the feeling of glam and decadence of the festival.

Virtual reality is coming and brands need to capitalize as soon as possible.

VR is quickly becoming a main stay in many campaigns, both internationally and locally. It is a new form of interactive branded experiences, and with novelty comes memorability which comes with brand loyalty.

It is also a form of marketing that takes a steady hand and a giant leap into the creative unknown.

During the Gouna Film Festival we wanted to highlight Attijariwafa bank Egypt’s interactive activations and booths have been giving people in Gouna a chance to be on the red carpet.

The bank is bringing consumers on a ride, making them feel the glammed up excitement of the film festival.

To bring consumers into the red carpet event, Attijariwafa bank has been playing around with VR. Starting with their 360 videos on the red carpet during the opening and closing ceremonies, allowing people to sit back and enjoy the scene from a new perspective. On the couch.

You can find the opening ceremony 360 footage here. 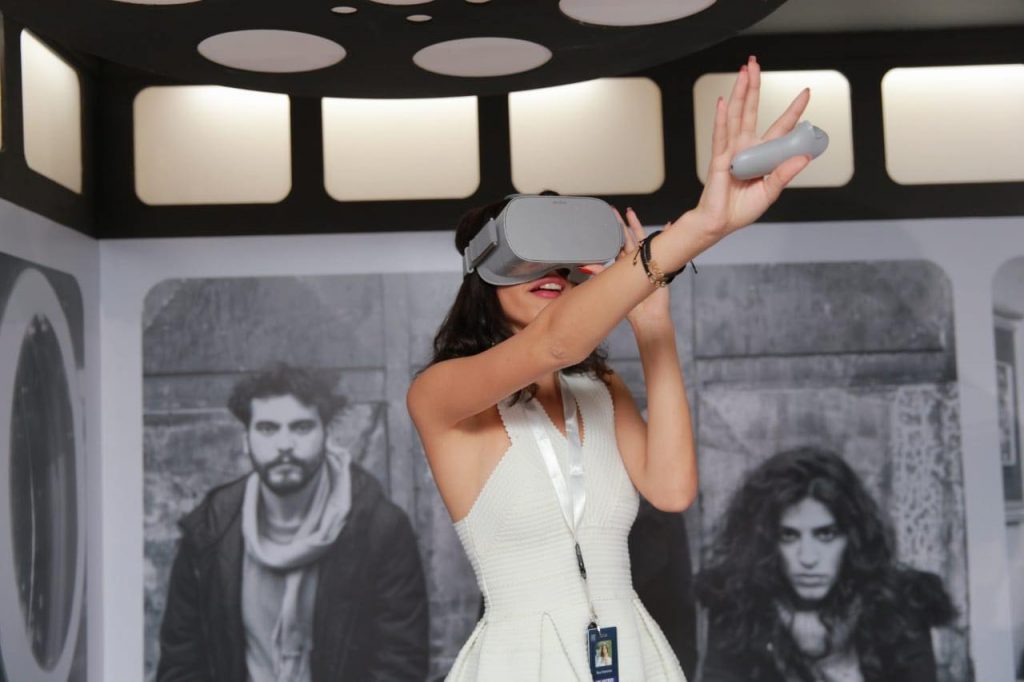 The booth, designed to look like a classical movie theatre entrance, is a fun and unique experience this year that balances a traditional marketing tactic (bringing people to events to live once in a lifetime moments) and new technology like VR.

The bank, a main sponsor of the event, has made it its mission this year to let everyone enjoy a moment in the spotlight.

Other than their fun VR booth, the bank has a scratch ticket competition, where scratchers can win premium giveaways such as a polaroid camera, movie premier tickets or even a ticket to the festival’s closing ceremony.

More interestingly however, and one of the branded activations to get a lot of attention this year, is the brand’s playful “VIP” ATM in Gouna.

This playful and captivating red carpet look-alike is a fun example of how banks can be more casual and interesting to consumers. It’s been getting a lot of engagement online as being one of the simpler yet enjoyable activations at El Gouna Film Festival 18.

This simple idea gives Attijariwafa bank users a sense of distinctiveness and exclusiveness as members of the bank.

To tie these activities together, the bank has several other activations going on. Activations such as branded coffees, an instant printing photo-booth on the red carpet, and the rebranding several Gouna Tuk Tuks.

Banks can be fun too!

This seems to be the bank’s message this year at the Gouna Film Festival and it is being heard loud and clear.

Through the use of a new and still exciting technology, as well as a simple and fun installation, Attijariwafa bank has some of the most fun and exciting activations in Gouna this year and are making waves on how local banks can engage with consumers.

Should banks be looking for more ways to engage with casual consumers? Yes.

Should banks try to be more playful? Only in appropriate amounts, and only in opportune moments.

We see Attijariwafa bank as an interesting new player in the local banking scene, especially after their two interactive activations, but will they stay interesting?

Vodafone EG NOT to layoff hundreds in effort to reduce costs