After last year’s controversial ad, where many heated commenters rampaged the internet in anger against the “sexist” ad, Memaar Al Morshedy had a chance to redeem itself this year and promote its latest major project “Skyline” in a more positive light.

Unfortunately, the brand seems to not have listened to criticism last year and published a misleading ad without proper testing or checking how people would react to the ad before releasing it to the public.

This Ramadan, the company released its newest campaign that seems to aim at positioning itself as an official record-breaking building.

Did you catch it?

For those who didn’t, Skyline’s VO announced that the real estate developer’s residential project has been recognized by international Guinness World Records as the “World’s Largest Residential Building.” Not only does the VO confirm its “win” but so does the video’s caption. 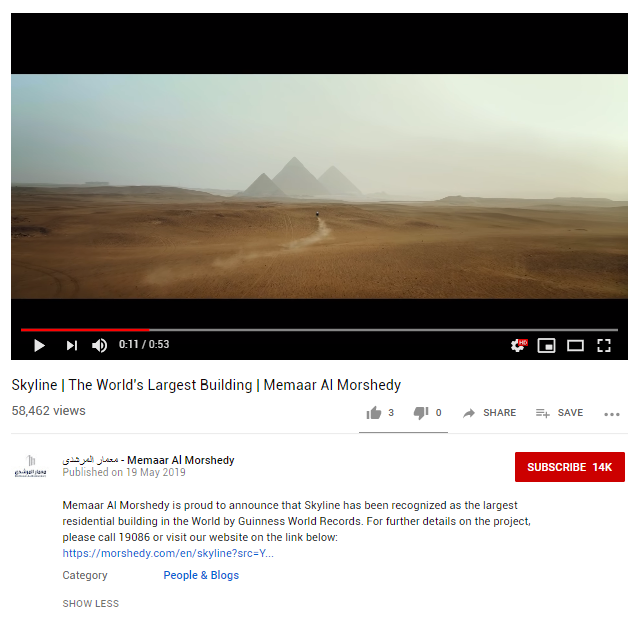 Guinness World Record title or attempt to win one?

The Guinness Book of Records has recorded thousands of global achievements in various categories over the past six decades but Skyline – Memaar Al Morshedy was not one of them!

It also looks like Skyline attempted to share the truth through their video, which clearly states that it is an “official attempt,” but decided not to be extremely clear with the VO.

The company has been positioning the brand under this title since last year, but seems they have yet to get approval to officially announce a record-breaking win.

Although it isn’t clear if Guinness World Records will give the award or not in the future, what is clear is that Memaar Al Morshedy’s Skyline has not learned to double or even triple-check ads before publishing!

Although it looks like the company has been pushing advertorials for a while with the hook that it has officially broken the record, we have yet to find official news from Guinness World Records themselves to confirm it and none of the previous articles have linked to official news as well.

The ad itself also does not provide a clear thought process or clear message to the consumer. What is Skyline trying to say? We are beautiful but unstructured? The ad is clearly well produced, with beautiful visuals but contains no real message or CTA other than to show off its “non-win.”

Last year, the ad released what many called a “sexist” ad and set many bloggers, publishers and commenters aflame. Many accused the ad of depicting and demeaning women as whiny and clueless, creating more negative buzz than positive last year.