Share
Facebook Twitter LinkedIn Messenger Messenger WhatsApp Share via Email
Facebook announced that they will begin removing deactivated or inactive accounts from pages on 12 March. So you might see a small dip in the number of fans you have. This will only affect people with Facebook pages, not profile accounts. But I believe Social Media Managers should be happy for losing some fans.

There are two primary benefits to removing voluntarily deactivated and memorialized Facebook accounts from Pages’ like counts:

But the significant question is not how many fans you got, Its: Who are your Facebook fans? do you have a profiling buyer personas?

Before writing this article I didn’t know that fake likes providers have more links served on search engines than the links teaching the techniques to generate organic fans. I have never been a fan of fake likes solution not because I hate fast results, but because I know its useless and once you get fake likes, you chose by your own free well to brag with the number of fans and sacrifice the community engagement rate on long-term.

The new Facebook update should filter your existing fans and come up with more accurate numbers of the active accounts in your community. Don’t miss keeping your eyes on your competitors to see the changes on their pages as-well. Prepare a chart to benchmark the expected fans loss for your competitive intelligence report.

Did you notice ConnectAds Facebook fan page? check it now, It got only 5.4K fans… Now go to your agency fan page and compare the number of fans in relevance to the net revenues against ConnectAds !

Don’t be shocked, A wise man once said: Being famous on Instagram is like being rich on Monopoly. The logic behind it is that the number of fans you have virtually has nothing to do with your business success or, your profitability.

Keep working with objectives driven mindset regardless the number of fans you have on Facebook. You would like to start thinking how to monetize the existing fans before promoting your fan page to attract new ones.

Agencies and brands spent years operating under the belief that they’d be able to access the audience they generated for free. But Facebook actually make you pay twice, first for fans acquisition and second to reach the fans you already paid to acquire. The Social Network chose to filter your feeds by building a news feed sorting algorithm. While we used to see organic posts reach about 16% on average back in 2012, brand pages organic reach now often under 3% in 2015. 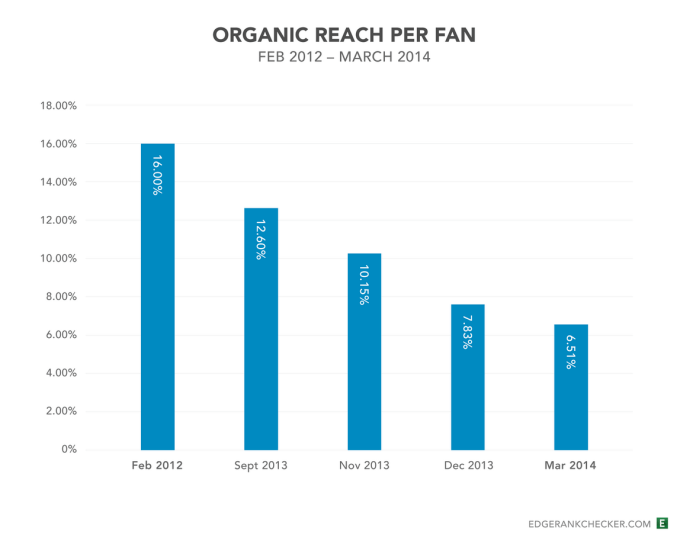 This explains the reason why fans may not see every post from a brand page as they used to and by increasing the number of irrelevant fans you consequently increase the probability of reaching non-relevant fans. I wish the new Facebook update will help our posts to reach more specific audience with relative effectiveness.

Germany defeated Argentina 1–0 thanks to a Mario Götze goal in extra time. Neuer personally won the Golden Glove award for the tournament’s best goalkeeper. Here-under is our post on Neuer ….

This post received more than 1500 Likes. Interesting interaction for zero $ invested. But less than 5% of the post engagement comes from Middle East [Where Think Marketing Operate]. The rest of likes comes from non-marketing related fans live in Bangladesh. The numbers of fans from Far-East keep increasing after this post and consequently we got a huge number of irrelevant [in-active] fans.

The bottom line is: by posting engaging content, you can increase the reach of your posts to fans you don’t expect. This kind of fans would interact once and then keep silent. Sometimes, you wish to delete irrelevant fans to keep the specialized taste of your online communities.

Very few clients would give attention to the engagement rate or, content shareability and the only number they see in Social Media reports is Facebook fans growth rate.

If you are in charge of a corporate Facebook page, you should prepare your client for a possible decrease in the number of likes.You better send an alert email before 21 March and get them involved in what they should expect in the next report.

Tell them that pages you manage could face quite decrease in numbers the next week and share your ideas for the next challenge.