Is SEO really dead? Replaced? Why MOZ and Majestic disavowed it from their brand names? In May 29th, 2013, we have read Rand Fishkin blog post about the move from SEOmoz to just MOZ, you can read it here (Goodbye SEOmoz. Hello Moz!)

This is the main reason Rand gave us “Calling ourselves “SEO”moz is no longer transparent and authentic. With products like Fresh Web Explorer, FollowerWonk, GetListed, and the beta of Moz Analytics (alongside the vast array of non-SEO content we publish), we’re no longer purely an SEO software company. Pretending otherwise is disingenuous, and that violates our core values.”

While I agree with that, but I think they were predicting the future of the SEO industry and being a SEO software company will shrink their business to a narrow area in the digital marketing industry, they knew that SEO can’t be a standalone activity anymore and that will affect their business as a software company and that’s why the move was announced with the launching of the new MOZ Analytics product to emphasize the above thought.

Recently in October 8, 2014, one of the most SEO software house, MajesticSEO which is a well-known product for nerdy SEOs around the world, has announced that they are rebranding their name to just Majestic instead of MajesticSEO. Whatever the reasons they stated, the reason for the change is the same why Rand and his team did the move, they didn’t want to be a pure SEO software company in their customers perception, however I believe Majestic is a bit behind of being a new software rather than a pure SEO software, MOZ has done it perfectly.

But why now? What changed?

Gone are the days when SEOs were able to manipulate Google Algorithm “some do but not for a long time”, in the old days if you want to rank a website you do some of the following techniques:

SEO is not just SEO anymore

Search engines are getting smarter, Google in particular released Panda, Penguin and lately Hummingbird to help them to only promote content that searchers are looking for, Google’s most important objective is to provide searchers with the best answers to their questions as quickly as possible,

They released Panda update in February 2011 to help fighting websites with low quality or duplicate “scraping” content which are ranking high in SERPs, Panda helps google to identify those sites easily and they still releasing new updates of Panda, It has been said that Panda first release affected 12% of search engine results.

In April 24, 2012, Google released a new update and named it as Penguin update which has been developed to target websites which get high ranking in SERPs through blackhat link building techniques. Google announced that Penguin affected 3.1% of websites in English and 3% of websites in other language, Google is still updating its algorithm to better serve their searchers and help webmaster who provide unique and valuable content to the web.

In September 2013, Google announced a new algorithm “Hummingbird” during its 15th birthday which has been said to be a complete replacement to Google algorithm, Google released the new algo because they want to link their Knowledge Graph with the user intent in order to provide users with results that answers their questions in a better way, not just to rank pages according to the keywords in the user’s query.

The hummingbird also helps improve the conversation search Google has been working on to provide searcher with real conversations as if searchers are asking humans, Hummingbirds helps Google to understand the user’s query and extend this understanding to other languages rather than English.

All these new changes and updates Google released are meant to help Google fighting search spam and identify more signals that can help it distinguish between billions of webpages, they are also meant to improve the engine itself (Hummingbird did it)

The Future of SEO

The game has changed, 360 degree, Google is pushing webmasters to provide the user with valuable information, not just to be valuable, but to be accessible at any time, for any devices, do you know that bad user experience for mobile users may lead to ranking issues Don’t believe it? Read on.

So it’s obvious, it’s not just an SEO, it’s the total journey of a searcher started from typing the query till closing the website. Google is always looking for better signals to ranking websites, signals that a webmaster has less control upon them, I remember Google has tried to drop links from their ranking algorithm because some were able to manipulate the algo, but Google announced that the results was not that good.

Google will continue looking for other signals that can improve their algorithm, some are:

Having a website optimized for search engines requires working on many areas that were actually not related to SEO in the old days, well optimized website requires great content, powerful social media accounts, public relationship, content marketing strategy and many others, that’s why I think, that was the main reason behind MOZ and Majestic move.

Question => What signals you think Google may consider adding to their ranking algorithm in the future? 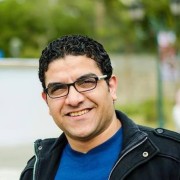 A highly motivated B2B marketing professional with a passion for all things around sales, localization, business development, technology and UX. Currently heading the marketing department for Future Group Translation and its subsidiaries around the globe with more than 6 offices span all over the world.

How Social Media is Taking Over the News Industry in Egypt

How Social Media is Taking Over the News Industry in Egypt