Qatari mobile phone services Vodafone and Ooredoo dialled up their support yesterday for the country’s emir by changing the name of their networks to ‘Glorious Tamim’.

The move comes amid tensions between Qatar and Saudi Arabia, the UAE, Bahrain and Egypt, who last month announced the severing of all diplomatic ties over allegations Doha bankrolled “terrorists” and had close ties with Saudi arch-rival, Iran.

Qatar’s largest telecom provider has changed its network name to “Tamim almajd” (Glorious Tamim) in a show of support for Qatar’s leader.

Qatar telecom provider Ooredoo changed the network name to “Tamim almajd” as a patriotic move which comes amid an escalating dispute with Saudi Arabia, Bahrain, the UAE and Egypt.

"Qatar will always be free, elevated by the spirits of the loyal"
Dear customer, Ooredoos' network name has been changed to "Tamim Almajd " pic.twitter.com/jOuTrABuzq

Many Qatari citizens supported for the move, taking to social media using thehashtag #تميم_المجدُ  (#Glorious_Tamim) to convey their approval of the decision by the telecommunication firms. Qatari’s Social media reactions seems to be happy with Ooredoo’s move and it influenced Vodafone Qatar to follow:

While Ooredoo could easily make the change because it is majority state-owned, like many major companies in Qatar. Though Vodafone is a British multinational company, its Qatar subsidiary is 70 percent Qatari-owned.

Ooredoo’s main competitor Vodafone initially offered users the option of coming into its stores to change their phones’ network names to support the Emir in a response to Ooredoo’s  initiative. 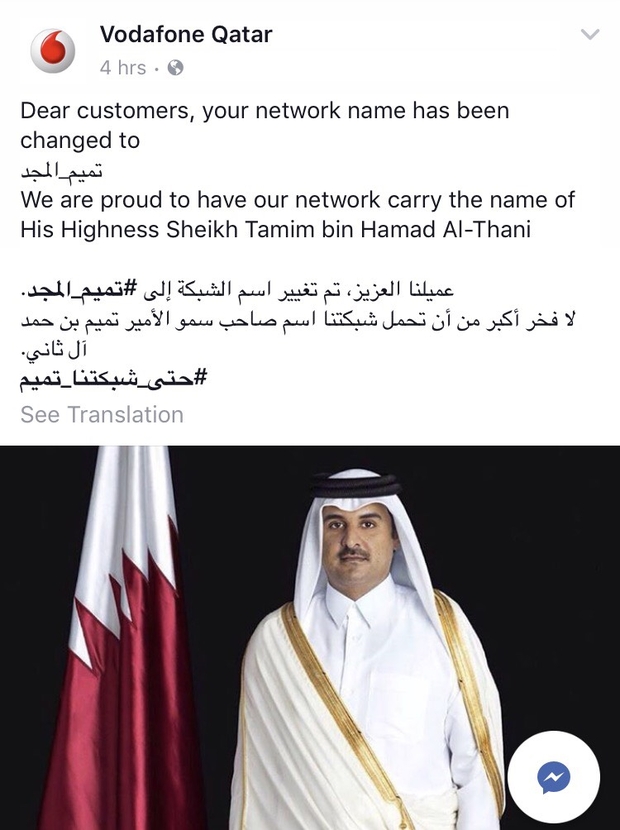 However, a tweet and Facebook post of the announcement by Vodafone Qatar was later taken down. Vodafone Qatar has not yet released a statement on why the posts were removed.

Calls for boycott of Vodafone Egypt after ‘Glorious Tamim’ campaign in Qatar:

While many of Qatar residents seems to be happy after the changes were announced by Vodafone Qatar, many Egyptians on social media quickly expressed their anger and started posting about boycotting Vodafone Egypt as a response for the Qatari branch decision.

Vodafone does not operate in Saudi Arabia or the UAE. But Vodafone Egypt is one of the highest ranking among Vodafone operating companies worldwide.

Some Egyptians outrage across social media resulted in mocking Vodafone Egypt and called for boycotting Vodafone Egyptian branch after the company’s branch in Qatar decided to change the network’s name to “Glorious Tamim” in a show of support to the country’s emir.

Unfortunately, @VodafoneQatar is Supporting the terrorist regime in Doha…… @VodafoneEgypt we are waiting for reaction from u pic.twitter.com/MIPuMo2nDz

Egyptians who called for the boycott thought that the move by Vodafone Qatar reflects the entire British telecommunication company’s stance in the dispute between Arab states and Qatar, in which the latter is accused of supporting terrorist groups.

Vodafone Egypt quickly responded to the situation saying that the move by the Qatari branch does not apply to the users in Egypt and do not represent the global company nor its Egyptian branch.

“Vodafone Egypt has nothing to with it,” they said in an official statement. According to Al Arabiya.net

It also said that a decision by Vodafone Qatar to replace the network’s name only reflects the direction of the company’s shareholders.

Vodafone’s Message to You: “We Get You”

Vodafone’s Message to You: “We Get You”