Since yesterday we talked about a successful advert by Chevrolet, today our eyes were on another creative and hilarious advert by Vodafone. We can frankly say that Vodafone is one of the brands that can impress its audience with its creative advert and it knows exactly how to reach them and deliver the message.

Vodafone’s latest advert will make you laugh and will give you a sense of yearning.

Vodafone’s new advert is a huge surprise for all of us.

3 days ago, Vodafone released its new advert to promote its ‘Flex’ bundle under the name of “Flexaweya” Are Smart. The bundle offers the users free Facebook and a free subscription to Watchit and Anghami Plus.

The telecom brand collaborated with the hilarious actor Mohamed Saad and took us on a journey of nostalgia. Vodafone’s advert recreated famous scenes from Mohamed Saad movies that we all love. These scenes are being used as memes to this very day and this is how the advert delivered its message.

Since the advert is promoting free Facebook, the advert depended on the idea of a young man scrolling Facebook for memes, and of course, the memes were the scenes from the movies.

Recreating Scenes Wins Over The Audience

This is one of the most effective factors that can make an advert successful.

Vodafone succeeded in reaching its target audience using one of the best ways ever, which is triggering their emotions. Most people love seeing their favorite scenes being remade after they grow up and this is what Vodafone gave its audience.

A remake of their favorite scenes and using memes; in fact, the memes used in the adverts are being used all over social media and this is one of the reasons this advert is so popular. Vodafone also played it smart when it used trendjacking in the advert. During the advert, you can see that it used a meme to describe the situation of the 4th wave of the Coronavirus that the country was going through a few days ago.

Also, this is not the first time Vodafone depends on memes when creating an advert, it had done it in 2020 to promote its ‘Plus’ bundle and the advert was very creative and impressive.

Also Read ➤ Vodafone Plus: Creating An Advert Out of Trending Memes

The advert has received very positive feedback and a very high number of views.

Most people in the comments have expressed how much they love the advert and that they love Mohamed Saad.

Around of Applause For The Moderation Team

We have to give the moderation team the credit for this huge social media engagement.

The team has been replying to comments using memes and lines from Mohamed Saad, which is driving more engagement and grabbing more attention to the whole campaign. 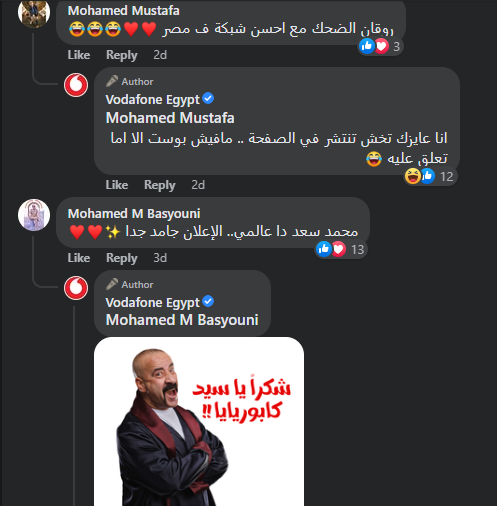 We can’t wait to see more adverts from Vodafone as it never failed to impress us.

Ramadan 2022: Flink Studios Did It Better For Sharp

Ramadan 2022: Etisalat Proves To Be A Much Stronger Telecom Brand

Ramadan 2022: Flink Studios Did It Better For Sharp

Ramadan 2022: Etisalat Proves To Be A Much Stronger Telecom Brand