Viber, one of the world’s leading messaging apps with more than 711 million unique users worldwide, today announces complete end-to-end encryption across all devices including Android™ and iPhone®, iPad®, Android tablets, PC and Mac desktops. This feature will be available over the coming weeks to all users who have the latest version of Viber. It includes strengthened security in every voice or video call, message, video and photo, in both group messages and one-to-one communication. As part of this update, Viber also launches ‘Hidden Chats’ allowing users to hide specific chats from the main screen so no-one but the user knows they exist. These chats can only be accessed using a four digit PIN, providing an optional additional layer of privacy to users’ personal communications.

“We take our users’ security and privacy very seriously, and it’s critical to us that they feel confident and protected when using Viber,” said Michael Shmilov, COO of Viber. “Because of this, we have spent a long time working on this latest update to ensure that our users have the most sophisticated security available and maximum control over their communications. We will continue to make this an ongoing priority as digital communication evolves.”

Rolling out globally over the coming weeks, users will automatically be protected by end-to-end encryption in all communications on their smartphone once they have upgraded to the latest version of Viber – v6.0 or higher. Users who are also using Viber on an iPad, Android tablet or desktop will be prompted to re-connect it to their phone using a QR code.

All communications can benefit from an additional layer of security through account verification. Users will see a color-coded lock on the right hand side of the screen indicating the level of security:

Grey Lock: During an end-to-end encrypted conversation and call users will see a grey padlock icon. Tapping on this icon will display a tooltip letting users know that messages sent by the participants are encrypted.

Green Lock: Users also have the option of manually authenticating their contacts by selecting that they are ‘trusted’. This means that the selected contact’s authentication key will be monitored for future changes so users can be certain that they’re talking to the right person at all times. Tapping on the green padlock will display a tooltip letting users know that messages sent by the participants are encrypted and your contact is verified.

Red Lock: If there is a problem with the authentication key of a previously trusted user, the padlock will turn red. The breach may simply mean that a user has changed their primary phone; however, it can also indicate a man-in-the-middle-attack. To solve a possible breach state, the participant needs to be re-trusted. Tapping on the red icon will display a tooltip noting that Viber cannot verify this number. 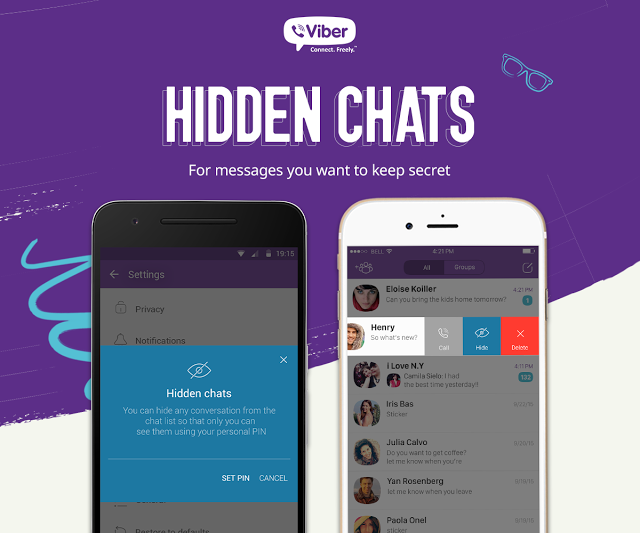 Users will now also be able to hide specific one-on-one or group conversations from the ‘chats’ screen so that no-one knows they exist and access them using a four digit PIN. Users can hide the conversation by tapping on the info screen for a particular chat. It will then ask for a four digit PIN or, for iOS users, provide an option for a fingerprint. Users will be notified of a message in a Hidden conversation without the text of the message, or who it is from, appearing on the screen.

This is not bi-directional, meaning if one user hides the conversation, nothing will be changed on the recipient’s side.

This latest update, along with the ‘Delete’ feature – which allows users to delete messages on the recipient’s phone even after they’ve sent them whether the person has seen it or not – demonstrates Viber’s increased focus on putting its users in control of their privacy and personal communications.

Part of the Rakuten family, Viber freely connects users around the world with the people that matter to them most. With more than 711 million unique users on the platform, Viber allows people to connect in the way that works best for them, whether that’s through individual messaging, video calls, group chats, or following brands and celebrities on Public Chats. Viber can be used on iPhone®, iPad®, Android™ phones and tablets, Windows Phone, Windows®, Windows 8®, Mac, Linux and Symbian devices over mobile or WiFi connections.