The classic reputation management quote states that: It takes 20 years to build a brand’s reputation and only 5 minutes to ruin it, according to Warren Buffet.

Brands that manage crisis with an “one type fits all” kind of response are on a fast and steady ride to their own demise. In the digital age we are living in now and social media’s rapid and vicious spread of information and news, there is no place for mediocre and useless copy-and-paste responses that don’t face the issue head-on.

More so, when your brand’s core values are being threatened, your crisis management strategy needs to be implemented quickly, confidently and effectively.

Uber promises to deliver a safe, reliable ride to the community, priding themselves on providing “24/7 support” and “rapid response”. In their community guidelines they state that “background checks” is a requirement to join Uber, all drivers must undergo a screening process. With their drivers staff rate duplicating every six month, do you believe they do that?

Let’s present a recent incident that happened to an Egyptian citizen in Cairo, while trusting in what the brand stands for and has been a loyal customer for more than a year now.

Amr Ashraf has been using Uber services for more than a year, with the utmost trust that there is a “reliable”, international brand he could depend on in case of any wrongdoing rare possibility.

The young entrepreneur requested an Uber car to transport him from the AUC in New Cairo to Heliopolis on Wednesday afternoon, where along the way, he happened to receive a business call, informing him that a certain business transaction is ready to be picked up.

He then, called his accountant and inattentively recited what his client informed him about the LE 6,000 ready to be picked up at a certain location and instructed him what to say to receive the money and complete the transaction with delivering an invoice.

It didn’t even cross his mind that the driver would be eavesdropping and has unlawful intentions!

But! The driver didn’t waste any time, he dropped Amr off at his requested destination and made a beeline to the address Amr gave his accountant. He used all the info collected from Amr’s call and pretended he was the accountant and took the money and left.

The driver was not that lucky as the incident was caught on surveillance cameras. But this is not even the worst part of the story yet.

If you thought that the driver act was inappropriate, wait till you know Uber’s reaction to Amr’s inexcusable experience with their service.

As per Amr Ashraf’s Facebook post and phone conversation with TV morning show “Sabah Dream”; he contacted Uber right after he discovered what the driver had done, their initial reaction was not one of confidence of what Amr just told them, and they urged him to contact law enforcement to file a report against the driver with the “license plate” as they have a “privacy policy” that hinders Uber form disclosing the driver’s ID number, his residency address or any useful information for that matter, even when he sent them a video featuring their OWN driver getting into the store and fraudulently requesting the LE 6,000.

Which when you think about it, then what is the difference between using Uber than a normal Taxi?

Uber Egypt corporation doesn’t do much for their customers in case of wrongdoing. They did not even care or consider how such an incident would affect their brand’s reputation.

Amr posted on Facebook the incident’s details and the incrimination video for Uber driver. By the help of his friends and the power of social media, his post was shared 14.2K times and gained engagement 5.8K, he acquired the whereabouts and the information to officially start an investigation on Saturday, with no help from Uber.

However, it was too late, as the driver resigned from Uber, left his known address and fled. 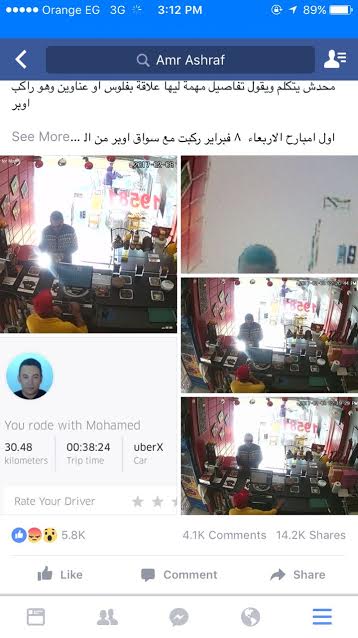 He did not give up defending his rights, as he re-posted it again and till this day, Uber did nothing to rein in or rectify the wrongdoing committed by one of their drivers while on duty.

– The customer always comes first? wrong! We believe hiring great employees, equipping and training them well, and encouraging them must come first!

– Putting the customer first means always listening and responding to customers. Obviously, brands should decide, do customers come first, or should employees? And deal with the consequences.

– Brands should know how to investigate negative publicity attempts to differentiate between a dissatisfied customer & troublemakers then take proper actions to fulfill the brand promise and quality standards.

– On Social Media, If you didn’t contain a negative publicity within 7hrs, it will turn into a brand crisis.

The surveillance camera video posted on Facebook received 991,000 views in 2 days before deletion. If 5 minutes can ruin a brand’s reputation what can 5 days do?!

MENA Region Professionals: Why You Should Develop A Personal…

Mercedes-Benz Give A Brilliant Happy 100th Birthday Gift To…