Twitter is about to cut up to 336 jobs out of its 4,100 employees working for the company around the world. Jack Dorsey has been permanent chief executive of Twitter for more than a week. Twitter just announced few hrs ago plans to lay off 8% of its workforce, or 336 employees.

The structure of the company is going to change a bit after the layoffs. While the engineering team will be smaller, it will still represent the biggest team of the company.

As the decision comes just a week after Jack Dorsey was given the role of CEO, and his willingness to make decisions like this was apparently part of the reason he got the job.

Made some tough but necessary decisions that enable Twitter to move with greater focus and reinvest in our growth. http://t.co/BWd7EiGAF2

Twitter shares (NYSE:TWTR) are now up 1.74 percent in the premarket compared to yesterday’s closing price of $28.74. 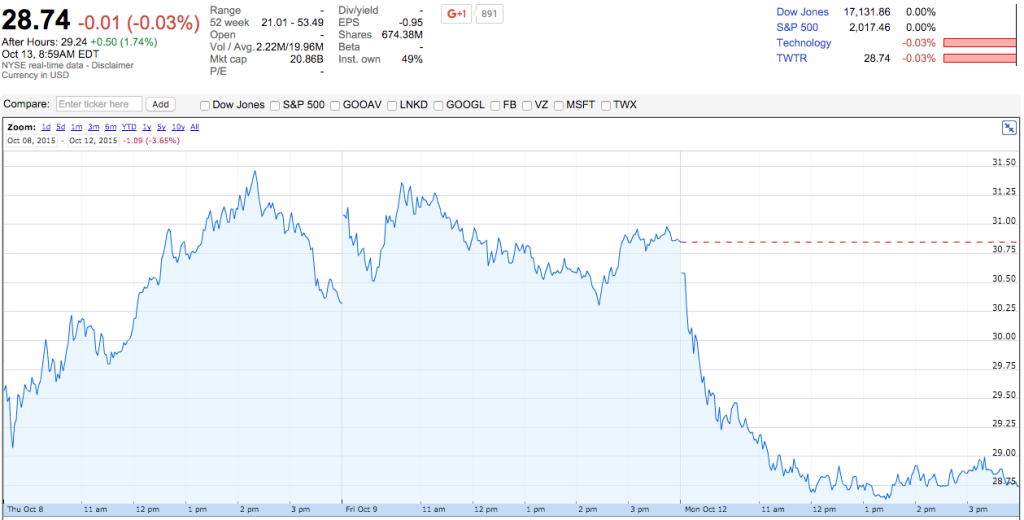 From: Jack Dorsey
To: All Employees
Date: October 13, 2015
Subject: A more focused Twitter

We are moving forward with a restructuring of our workforce so we can put our company on a stronger path to grow. Emails like this are usually riddled with corporate speak so I’m going to give it to you straight.

The team has been working around the clock to produce streamlined roadmap for Twitter, Vine, and Periscope and they are shaping up to be strong. The roadmap is focused on the experiences which will have the greatest impact. We launched the first of these experiences last week with Moments, a great beginning, and a bold peek into the future of how people will see what’s going on in the world.

The roadmap is also a plan to change how we work, and what we need to do that work. Product and Engineering are going to make the most significant structural changes to reflect our plan ahead. We feel strongly that Engineering will move much faster with a smaller and nimbler team, while remaining the biggest percentage of our workforce. And the rest of the organization will be streamlined in parallel.

So we have made an extremely tough decision: we plan to part ways with up to 336 people from across the company. We are doing this with the utmost respect for each and every person. Twitter will go to great lengths to take care of each individual by providing generous exit packages and help finding a new job.

Let’s take this time to express our gratitude to all of those who are leaving us. We will honor them by doing our best to serve all the people that use Twitter. We do so with a more purpose-built team, which we’ll continue to build strength into over time, as we are now enabled to reinvest in our most impactful priorities.

Thank you all for your trust and understanding here. This isn’t easy. But it is right. The world needs a strong Twitter, and this is another step to get there. As always, please reach out to me directly with any ideas or questions.

Photo courtesy: The Twitter logo is displayed on a banner outside the New York Stock Exchange (NYSE) on November 7, 2013 in New York City.