Last week, mobile phone manufacturer and brand Huawei met scandal just as their newest campaign for their Nova 3 phones launched. Actress and Influencer Sarah Elshamy, who was a main part of the campaign, released behind the scenes photos.

The photos showed Elshamy and her co-actor filming one of the shots in the ad that is displayed to be a selfie but shows the photo was taken by a professional DSLR camera on a tripod. 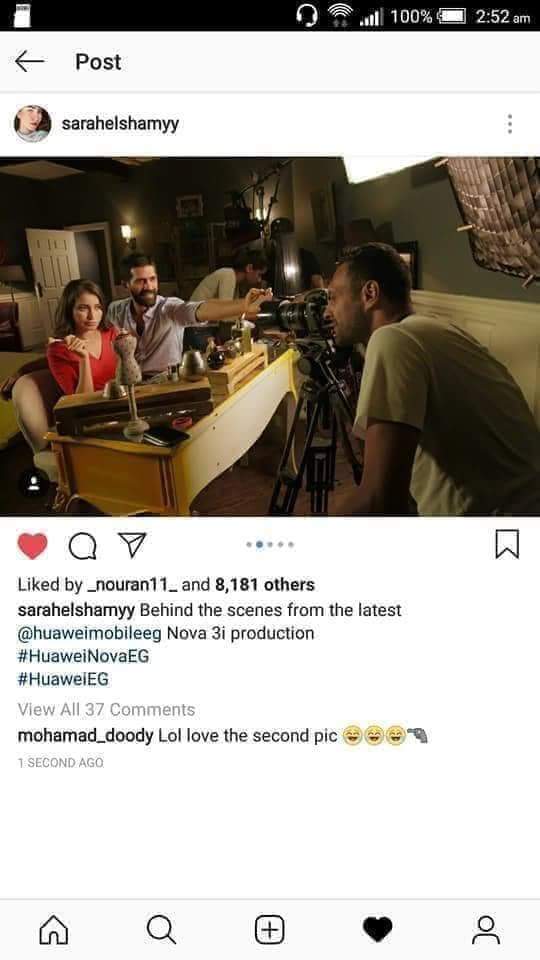 The photo was taken down within 24 hours by the actress, but not before it was copied and circulated around social media.

After a week of silence, Elshamy and Huawei finally spoke out.

Youm7 had an exclusive talk with Huawei Egypt Vice President Keith Lei in response to the launch and scandal. Lei is quoted as saying that it is natural to shoot promotional material with professional equipment to provide the best settings and outcomes. He goes on to say that the aim of the campaign was to show how users could use the phone’s features, and images in the ad are simply references.

Although the end of the ad does state that images are for reference only (shown above), which would protect the brand from possible legal action, it still continues to damage the brand’s appeal.

This isn’t the first time that Huawei has created misleading campaigns.

Just earlier this year, while trying to break into the US phone market, the brand asked people to write in Best Buy’s (a popular electronics store) review section to win a Huawei Mate 10 Pro to beta test. The main issue is that these people had never seen nor tested the phone, but were asked to review it.

It was easy to see that Huawei’s aim was to capture users who went onto Best Buy’s review section and see misleading 5-star reviews on the phone. The company would later state that there was a miscommunication, as there were two different campaigns happening at the same time and that only actual beta testers were supposed to post on the review site.

P9 smartphone on Google Plus:

In 2016, the brand was also caught for misleading advertising when a photo they uploaded to Google+ was found to be from a 2.6K USD Canon EOS 5D Mark III DSLR, paired with a 1.9K USD lens.

The photo had been captioned “We managed to catch a beautiful sunrise with Deliciously Ella. The #HuaweiP9’s dual Leica cameras makes taking photos in low light conditions like this a pleasure. Reinvent smartphone photography and share your sunrise pictures with us. #OO”

The phone manufacturer released a statement to Android Police stating

“It has recently been highlighted that an image posted to our social channels was not shot on the Huawei P9. The photo, which was professionally taken while filming a Huawei P9 advert, was shared to inspire our community. We recognise though that we should have been clearer with the captions for this image. It was never our intention to mislead. We apologise for this and we have removed the image.”

Some brands take a dress-up approach to branding. They feel like they must be something they are not in order to attract customers.

While many brands do have accidents or exaggerated statements, Huawei’s repeated actions shows either a lack of awareness or preparation and an overuse of falsifying claims.

While as marketers we understand that this often happens in advertising, the fact that it happens often to this one brand and keeps being publicized means that Huawei is doing something very wrong within the organization.

The situation not only damages Huawei’s reputation with local consumers, but hurts local marketing’s reputation as a whole. At a time when more and more people are looking for more authentic brands and advertising from their favorite brands, scandals like this only serve to “remind” consumers to be wary of marketing material.

Misleading or false advertising only lowers consumer confidence, increases negative views on advertising as a whole and damages relations between brands and consumers.

As the 3rd top mobile manufacturer in the world, Huawei should already understand the impact these “mistakes” keep making and needs to tighten PR and Marketing efforts to ensure more authentic content and stronger protocols to prevent leaks.