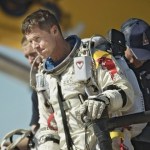 Felix Baumgartner might not have broken Joe Kittinger’s world record for the longest time spent in freefall, but he did smash a fourth milestone during his dive. In addition to records for the highest ever jump, longest distance fall and fastest downward speed, the stunt was watched by eight million YouTubers at the same time. While the site hasn’t divulged exact stats, that figure is apparently higher than those who watched President Obama’s inauguration. That said, if you weren’t one of the eight million, you can head on past the break to watch the highlights reel — unless you’re already bored of watching a man fall, unaided, you know, from space.