This year, ITB Berlin is celebrating its 50th anniversary. With more than 11,000 exhibitors and organizations from more than 185 countries to be in the 26 halls on the Berlin Exhibition Grounds.

The Egyptian Tourism Authority attended the world´s largest tourism fair ITB Berlin in its 50th edition from March 09-13 as Jubilee Cultural Sponsor. Egypt was one of the partners of the first hour.

During the three days of important meetings and gathering Egyptian Minister of Tourism, H.E. Hisham Zaazou, Ambassador H.E. Dr. Badr Abdelatty and Tourism Councellor Tamer Marzouk met many policy makers from the tourism and airline industry as well as opinion leaders and politicians from al over the world.

As Jubilee Cultural Sponsor of the show, cultural contributions by Egyptian musicians and craftsmen on the booth, the fairground and in the city center of Berlin gave an insight into the culture, hospitality and beauty of Egypt.

The stand highlighted the most iconic sites like the Pyramids of Giza and the Temple of Abu Simbel as well as a typical Egyptian felucca, where the VIP’s meeting point was set.

The innovative and impressive design of the Egyptian stand was awarded the “Best Exhibitor Award” in the category Africa by the Cologne Business School (CBS) in cooperation with ITB Berlin.

For the 16th time, students and professors of the CBS evaluate the best stands among the 11.000 exhibitors from 185 countries and nominated winners in 11 different categories. The “Best Exhibitor Award” has become a quality indicator for a strong and attractive trade fair presence. 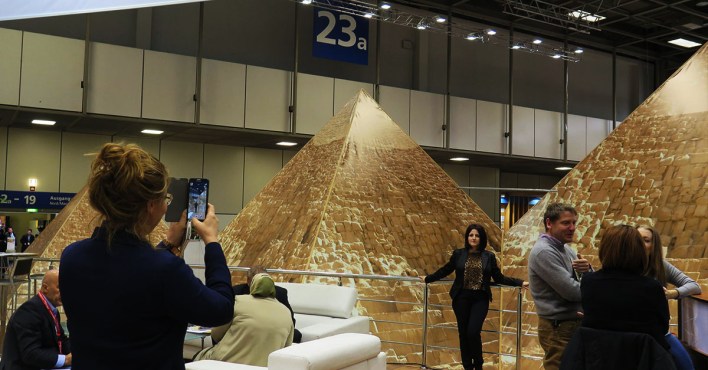 Events and Awards
2 weeks ago

The Obelisque Award: A Great Opportunity For Furniture Designers

Startups Without Borders Launches Its Hybrid Edition From Rome and Cairo

Creative Industry Summit: A Success Story To Fly From Egypt to KSA

The Obelisque Award: A Great Opportunity For Furniture Designers

Startups Without Borders Launches Its Hybrid Edition From Rome and Cairo

Creative Industry Summit: A Success Story To Fly From Egypt to KSA