Prime Minister Ibrahim Mahlab, held a meeting on Tuesday 12/23/2014, attended by Minister of Tourism, Hisham Zazou, Governor of Cairo Jalal Al-Said, Chairman of the Chamber of Information Industry Mohamed AL Amine, and a number of those who are in charge of the media industry.

During the meeting, they agreed to launch a tourist promotional campaign to attract Arab tourists, entitled “Egypt is close”, the marketing and the timing will be published through various Egyptian channels, newspapers, various magazines, and social networking sites, with the participation of a large number of Egyptian and Arab artists.

This campaign aims at revitalizing the tourism sector, which contributes to the support of the Egyptian national economy, and opening opportunities for the operation of large numbers of youth in many of the service and production sectors.

Cabinet Spokesman Ambassador Hossam Alquawish pointed out that the PM said during the meeting that the campaign “Egypt is close” is a national project requires concerted Egyptian efforts, stressing that all sectors of the state will participate in the responsibility for the success of this campaign, working on providing all the conditions and services necessary, and to facility Arab tourists visit, allowing him to identify the tourist attractions that abound in Egypt.

PM also called on the Minister of Tourism to coordinate with the Ministry of Civil Aviation regarding the implementation of the next tourism programs to Egypt.

For his part, Minister of Tourism pointed out that this promotional campaign will have a significant impact on inbound tourism to Egypt, and they will take into account the occasions, feasts and vacations during the coming period in Egypt. 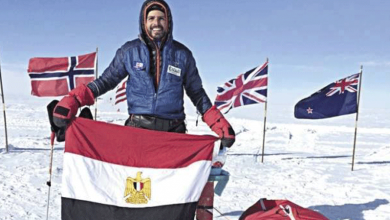 Omar Samra; The first Egyptian to ski to the…