Ever since their acquisition of regional ecommerce brand Souq in 2017, international ecommerce powerhouse Amazon has been slowly integrating their main brand into Souq’s online marketplace.

Last month, CNBC reported that Amazon was preparing to launch a new ME online marketplace.

CNBC stated that “Amazon has been reaching out in recent weeks to large third-party sellers in North America, informing them of an upcoming opportunity to reach consumers, first in the United Arab Emirates and then in Saudi Arabia, according to several merchants who spoke with CNBC. They all asked not to be identified because the discussions with Amazon were private.”

It seems that Amazon is now making its move.

For the last few weeks, online shoppers on Souq have been met with this page. 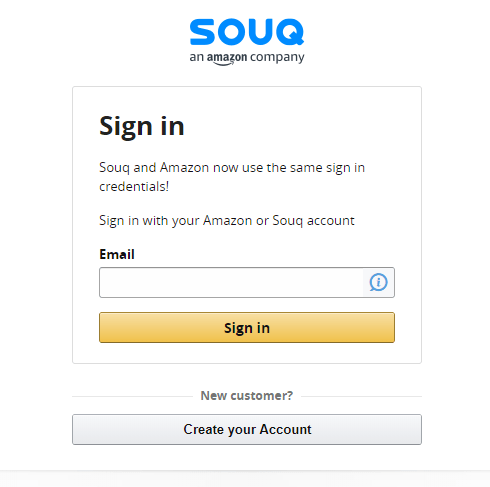 Amazon and Souq’s merging of sign-in credentials has sparked a lot of discussion and speculation about Amazon finally making its play and replacing Souq in favor of expanding the Amazon name in the Middle East.

Yesterday, screenshots of Amazon’s newest page have been shared online, suggesting that we may soon see Amazon as a mainstay in the region. Shared by founder of online marketplace JadoPado, Omar Kassim, these screenshots could confirm that Amazon’s Souq takeover is almost here.

1. First image is from a dev site (🎩 anonymous Twitter friend)

According to Kassim, an anonymous Twitter friend shared a screenshot of a developer site, showing a landing page that states “Souq is now Amazon.”

The page states that other than moving your product catalogue, prices and banking information to a new Amazon Seller Central account, sellers will also have new options such as Automated Pricing and a new Reports Tab that gives “access to different reports regarding payments, inventory opportunities, sales and traffic reports, campaign and advertising reports.”

According to MENABytes, “Souq.com/Amazon’s new office in Amman, Jordan also confirms that Souq’s brand is about to get absorbed into Amazon. The new office doesn’t carry any Souq branding and its lobby welcomes the visitors with an Amazon logo on the wall. The pictures of this new office were also shared by Souq.com’s CEO Ronaldo Mouchawar.”

According to the CNBC report “The move comes as Amazon seeks to find a formula for profitable growth in its retail business… Amazon has struggled to build substantial businesses in China and India because of local laws and hefty competition, and its retail division still loses money every quarter when excluding the U.S. and Canada…Sellers say that Amazon is most excited about getting beauty products like perfume, as well as electronics, into the two largest Middle East economies.”

Be More Productive at Work: The Superpower of Saying “Hi” and Checking In