Egypt is a football nation; the love of this game has been passed on from one generation to the next. Young football lovers transform Egypt’s side streets and alleyways into stadiums.

Al Ahly, named the “African Club of the Century” by CAF in 2000, also has incredible international pedigree as they hold the record for most official international titles won globally. Al Ahly holds 131 Total number of trophies (Record) as it surpasses titles held by any other senior team in the world.

Al Ahly has developed into more than a club over the years. After Al Ahly’s original club in Gezira (in Zamalek district), Al-Ahly founded two more clubs, one in Nasr City and one in 6 October City.

Al-Ahly historically formed the first ever TV channel belonging to a club in Africa, Al-Ahly TV. The channel went through great success since its formation, winning Egyptian sports TV channel of the year 2010 award from Al Ahram newspaper.

Al Ahly also became the first club in Africa (second in Middle-East after Al-Hilal KSA) to form an official store chain, Al-Ahly Official Stores in Nasr City and other locations around Cairo.

As one of the World’s biggest clubs, Al Ahly has grown to be a major football brand in Africa while other clubs struggle in generating revenues via sponsorship. Al Ahly is enjoying credible success confirmed by partnerships with wide range of premium brands.

Back in 2011 Etisalat Egypt outbid rival company Vodafone, which had previously partnered the Al Ahly club since 2002. Etisalat deal was signed for 22.6 million USD to sponsor Al Ahly t-shirt to be the biggest deal of its kind in Egyptian football history.

Vodafone’s experience on Social Media has become a case study as the signing of this agreement associated with launching #1isBack hashtag on digital media to be just the beginning and expected to be followed by more digital engagement programs activation, which will further support the brand commands nationwide audience and millions of fans and followers on Facebook and Twitter.

Since it’s launch in November 1998, Vodafone has been an avid corporate citizen with a strategy to establish Vodafone as the leading company in Egypt in the field of corporate social responsibility activities.

For 17 years Juhayna, Egypt’s leading dairy products brand secured a continuous long term sponsorship for Al Ahly Football Club. Since Juhayna’s logo has always been on the back of the players’ t-shirts, for 2013 Juhayna campaign Leo Burnett Cairo came up with the line ” Juhayna.. backing Al Ahly for 15 years” , which has a double meaning in Arabic “backing up” and “on the back of” as well.

It was a great idea for Juhayna to share their successful story with Al Ahly as a backbone and a partner in a story told by Am Harith (the man responsible for the changing room and the lockers).

Am Harith is a witness to all the events that the club has lived for many years, events that involved humanly moments connecting, players, coaches, workers, fans and supporters all over the country. This story succeeded in spreading the message and awareness among thousands of supporters all around Egypt.

Shell Lubricants Egypt, the leading premium motor oil distributor in Egypt, signed with the Board of Director of Al-Ahly Club a sponsorship contract for the first football team. The sponsorship contract stems from the company’s willingness to encourage and support sport activities and that brings joy and happiness to Egyptians who admire football above all.

The signing ceremony was attended by members of the board of Al-Ahly Club headed by Eng. Mahmoud Taher, the Chairman of the Board, footballers of the first team led by Juan Carlos Garrido, the team’s Manager.

“We are very delighted of such a crucial step” said Mr. Saher Hashem, Managing Director of Shell Lubricants Egypt. “We pride ourselves for sponsoring Al Ahly Club, the club of the century and one of the most acclaimed, popular and winning teams in Egypt and worldwide. That’s why Shell Lubricants was keen to sign this sponsorship contract, as a way to acclaim the prestigious team and to share football passion with fellow Egyptians, who support their beloved team” added Hashem.

Egyptian steel was founded in 2010. The company has grown rapidly, despite the short period since its establishment to put sponsor the Red Castle in 2015.

While the official pizza title sounds blurry and will not guarantee that Al Ahly fans will order from Domino’s Pizza while watching their beloved team but, It’s considered a good move for a brand that rarely appear in the media with very limited presence in TV commercials.

Definitely Al Ahly wide fan base will help in branding Domino’s Pizza among Egyptian youth, yet it’s too early to forecast if this deal will change Domino’s Pizza sales numbers in Egypt or MENA region anytime soon.

In case you feel hungry while reading this article and would like to try Domino’s Pizza, you can make an order from Egypt by calling 19223 hotline.

Coca-Cola has had stadium advertising at every FIFA World Cup since 1950. The Coca-Cola Company is one of the longest-standing corporate partners of FIFA, with a formal association since 1974.

We think Al Ahly, the most deep rooted football team in Egypt with a fan base of more than 65 % of the population will be a good vehicle for Coca Cola Egypt PR that will support Coca Cola in-direct marketing objectives in Egypt. Additionally, the placement of Coke logo will make Al Ahly jersey look more classy.

Its important to mention that SAIB Bank is already sponsoring El Zamalik football team which has had a rivalry with El Ahly since playing their first league derby in 1948.

As Zamalek crowned Egyptian premier league champions for the first time since 2004 with SAIB Bank and Pepsi as main sponsors. SAIB bank will continue sponsoring El Zamalik for 2015/2016 season in addition to sponsoring Al Alhy. 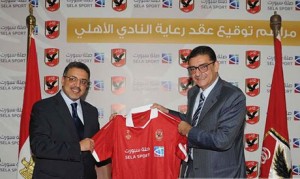 Under the new sponsorship deal, Al Ahly will receive a sum of 250 million EGP over the period of three years, making it the biggest sponsorship deal in the history of Egyptian football.

Al Ahly signed the contracts in the club’s headquarters, with the attendance of chairman Mahmoud Taher and several board members.

Al Ahly, in many ways, remains a top-notch organization. Al Ahly keep setting more challenges for other clubs to attempt surpassing Al Ahly’s achievements not only on the pitch but also in marketing and brand management.