We’re almost 15 days away from welcoming the holy month of Ramadan; it is the time when we all come together.

The holy month of Ramadan is considered as a season for brands and businesses; before the month starts brands always prepare for their Ramadan campaigns and adverts but to be able to successfully create a campaign, they have to know their customer’s behavior and how it changed along the year.

Most of the time, the consumer’s behavior changes especially when it comes to the usage of digital platforms.

Two major companies have made it easier this year and made research to help brands have a better understanding of the consumer shopping behavior during Ramadan in Egypt.

If you’re a marketer or an advertiser then you definitely have noticed the increase in the usage of digital platforms. This increase will arise a few questions in your head, like What will be the preferences of consumers in terms of shopping in Ramadan this year? Which devices or digital platforms will be preferred?

AD Colony and GlobalWebIndex have all the answers and insights you need.

The research done by the two companies will be answering questions that will help out marketers and brands.

To be able to understand and analyze the behavior of the consumers, AD Colony, a digital turbine company collaborated with GlobalWebIndex, an independent research company conducted a research to analyze the users’ usage of mobile devices, their digital platform preferences, the time they spend on mobile devices, and the impact of the mobile ads on users in Egypt.

The two companies have created a Ramadan survey, which is conducted specifically in Egypt. Most of the respondents were aged between 16 to 34, 57% of them were male while 43% were female. The survey revealed that 65% reveals the level reached in the age of mobilization in the region.

How People Spend Their Time In Ramadan

The time spent on smartphones is, in fact, increasing day by day. 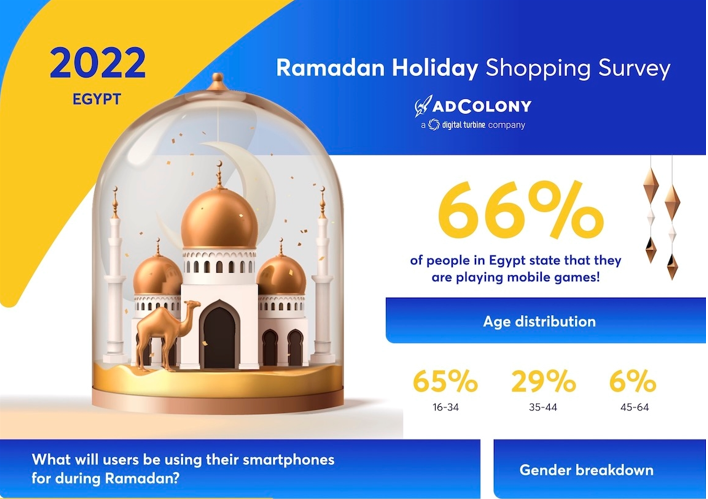 The reason why the time spent on smartphones is increasing is that 39% of the respondents stated that they are spending from 30 minutes to 2 hours playing mobile games during Ramadan as the preferred time to play or to shop online is during fasting, between 12 PM to 6 PM with 27% and 34% respectively.

The Impact Of Ads On The Consumer Behavior

Agencies and brands want to know their audience’s preferences when it comes to ads.

The survey revealed that 47% of the participants stated that the ads they come across on their phones have a huge impact on their purchasing decisions compared to TV adverts with only 26%.

61% of the respondents stated that they previously made their Ramadan shopping with their smartphones directly from mobile ads, and 81% stated that they would consider buying a product if the advertisement appeals to them.

In fact, it was stated that 68% of people in Egypt would like to encounter food ads, followed by Apparel with 48%, then telecom companies with 40%.

The research included an analysis of the industry-specific data, which revealed the following, 52% of people in Egypt will visit the stores in Ramadan to buy their groceries, while 43% of them will use online shopping and home delivery. 82% of the users stated that they will mostly be cooking at home during Ramadan, while 8% stated that they will get takeout.

As for telecom companies, 58 of the users in Egypt are expecting a discount on calls and SMS.

The survey revealed that car purchasing in Egypt increases during Ramadan since 55% of the people in Egypt stated that they are waiting for Ramadan’s offers to purchase a car.

Cosmetic brands’ revenue also increases during Ramadan as women’s cosmetic expenses increase. Women tend to buy cosmetic products, which is shown in the survey as they buy 37% of hair care products, 34% of Skincare products, and Perfumes with 31%.

52% of the survey participants stated that they will travel abroad during Ramadan, while 55% of mobile gamers in Egypt who love to travel will buy their transportation tickets online.

This research and analysis will definitely be a huge help to marketers when it comes to targeting their audience.